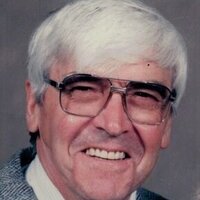 Essex - Wesley "Bay" Benjamin Valyou, 85, died peacefully Sunday morning, May 15, 2016 with his loving family by his side.

Wesley was born on May 26, 1930 in South Burlington, the youngest son of Edward and Clarice Valyou.

He had worked for the VT Heating and Ventilating Co. for over 48 years, retiring in 1997. In 1999, he suffered a stroke and never regained his speech, but continued on with gestures and "Hey".

Bay loved the outdoors and hunting and fishing with his boys. He and Faith enjoyed camping and visited 49 states.

He enjoyed bowling and wood crafting.

Before moving to Essex, he lived for 17 years in Fairfax and over 22 years in Milton.

He was predeceased by his daughter-in-law Lisa in 2015 and all of his brothers and sisters.

Visiting hours will be held on Thursday May 19, 2016 from 4-7pm, with services at 7pm by Fr. John Feltz, in the Minor Funeral Home in Milton. Burial will be in St. Thomas Cemetery at the convenience of the family. For those who wish memorials may be made to either the VNA 1110 Prim Road, Colchester, VT 05446 or the VT Respite House, 99 Allen Brook Road, Williston, VT 05495.

To order memorial trees or send flowers to the family in memory of Wesley "Bay" Valyou, please visit our flower store.