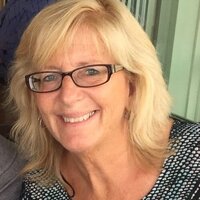 Wendy graduated from Milton High School in 1974 and received an Associate degree from Champlain College in 1976. She worked for the federal government for 36 years, including the Farmers Home Administration, the Post Office, and the Border Patrol. During her 21 years at the Border Patrol, she was administrative assistant to six Chief Patrol Agents and five Acting Chief Patrol Agents at the Swanton Sector Headquarters. She retired in 2013.

Wendy was with her husband, DJ, for over 42 years and they celebrated their 30th wedding anniversary this year.

She loved playing Bridge on Wednesday afternoons at the Milton Public Library and playing cards and cribbage with her siblings and friends. She was an avid UVM hockey fan and season ticket holder. She was known for her sense of humor, for correcting everyone's grammar, and for being incredibly thoughtful. She never missed sending a card to her friends and relatives for any life occasion. She was the one who kept every group that she was part of together: her family, her coworkers, her classmates, and her friends.

She is survived by her husband David "DJ" Howard; daughter Alex Howard; and siblings Marty Branch, Jean Anne Branch, and Kathy Gordon and her husband Steve. She is also survived by her husband's parents Shirley and Pete Gay and brothers Pete Gay Jr. and his fiance Kelly Parah, Rick Howard and his wife Lori, and Chris Howard and his wife Debbie. She is also survived and loved by many nieces and nephews. She was everyone's favorite aunt. She was predeceased by her parents, Leonard and Lutie Branch, her husband's grandmother Dora Ponsant, and her nephew and godson Michael "Mikey" Duffy.

Visiting hours will be held on Friday, November 30, 2018 from 4-7 PM in the Minor Funeral Home, Route 7 in Milton. Funeral service will also be held in the Funeral Home on Saturday, December 1, 2018 at 11:00 AM with a reception to follow at the Eagles Club in Milton.

In lieu of flowers, memorial contributions may be made to the Friends of the Milton Public Library Giving Tree in memory of Wendy Howard, 39 Bombardier Road, Milton, VT 05468.


To order memorial trees or send flowers to the family in memory of Wendy Elizabeth Howard, please visit our flower store.