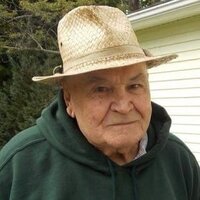 Milton, Walter N. Bezio, 90, of Everest Road passed away peacefully on Thursday, September 6, 2018 at the Homestead at Pillsbury in St. Albans.

Walter was born August 27, 1928 in Burlington, the son of the late Joseph and Myrtle Morrow Bezio. On September 6, 1947 he married Eleanor Smith in St. Ann's Catholic Church in Milton.

He had been employed with the Blodgett Oven Company for over 44 years as a Tool and Dye Maker. He was an avid Red Sox Fan.

He was predeceased by his wife Eleanor on August 3, 2008 and his grandson, TJ Young.

As per Walter's wishes there will be no Funeral Service, however Visiting Hours will be held on Monday, September 10, 2018 from 5 to 7 pm in the Minor Funeral Home in Milton.

In Lieu of Flowers, Contributions may be made to the American Heart Association, Vermont Affiliate, Inc. 110 Main Street, Burlington, VT 05401


To order memorial trees or send flowers to the family in memory of Walter N. Bezio, please visit our flower store.