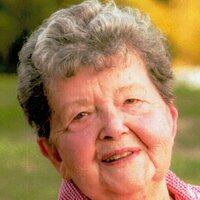 Milton - Valada "Bunny" Richards, 86, passed away peacefully at her home on Sunday, April 1, 2018 surrounded by her loving family.

After high school, Bunny moved to Milton. She married her husband, Robert "Bob" Richards in 1948. The couple began and owned a successful dairy farm on Lake Road in Milton for many years. Bob predeceased her in 2002. The couple enjoyed a marriage of 54 years.

In 1976, Bunny was chosen as VERMONT MOTHER OF THE YEAR.

Bunny leaves her church family, along with many friends. She will be greatly missed by all.

Visiting hours will be held on Friday April 6, 2018 from 11-1 pm in the Minor Funeral and Cremation Center in Milton. A Funeral Service will follow at 1pm in the Funeral Home. Interment will be in the Miltonboro Cemetery at the convenience of the family.


To order memorial trees or send flowers to the family in memory of Valada Lorraine "Bunny" Richards, please visit our flower store.