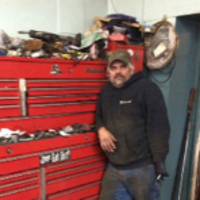 Milton - Timothy Heath, 52, died Saturday April 4, 2020 at his home due to heath related complications.
Tim was born on September 13, 1967 in Putnam, CT., the son of Thomas and Sandra (McCormick) Heath.
Tim was a graduate of the Colchester High School Class of 1985. He was married to Suzanne Penrod on 9/9/99 (so that he couldn't forget that anniversary)Tim did not light up a room with his smile or bring joy to everyone he met or any of the other stuff we are supposed to say right now, However if you looked past the rough exterior you would have been so very lucky. He was a man who would do absolutely anything for friends, family and often for people he hardly knew. He built his business Old Fort Auto based on being honest and treating people the best he could. He was proud of his work, proud of his children and supported them in all there endeavors.
He loved his motorcycles and spent many hours riding the roads of the northeast with friends. Lots of hours spent with friends building enduro cars, mud trucks and fixing dirt bikes.
He made us all more.
He will be dearly missed by his wife Suzanne and family.
In addition to Suzanne he is survived by their children Michael Rich of Milton, Harley Heath of Phoenix, AZ, Thomas Heath and his fianc Emilee Odendahl of Milton, his father Thomas E. Heath of Milton, his sisters and brothers Wendy Durochie and husband Ron of Hinesburg, Jill Heath of NY, Randy Heath and his wife Tammy, Michael Heath and his wife Kathy and Vikki Heath, all of Milton, by his father-in-law William Penrod of Colchester, and his sister-in-law's Karen Penrod of VA, Becky Louko of Fairfax and several nieces and nephews. He was predeceased by his mother Sandra and his mother-in-law Joan Penrod.
There will be no services at this time. A Celebration of Tim's life will be announced at a later date.
For those who wish, online condolences may be made to www.minorfh.com


To order memorial trees or send flowers to the family in memory of Timothy Heath, please visit our flower store.