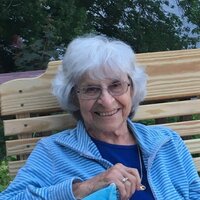 Obituary of Theresa May Irish

Burlington - Theresa May Irish, 91, (affectionately known as "Nona") passed away in Essex at the home of her daughter Paula, on Saturday, December 15, 2018, with her loving family by her side.

Nona was born on May 24, 1927 in Burlington, the daughter of Edward and Cora (Remillard) Murray. She was one of nine children.

She married Edward Irish on February 7, 1948 and spent a full 70 years with him and their five children.

Nona worked for Bell Telephone before marrying Ed. She loved knitting and spending time at their camp in Grand Isle. She especially enjoyed talking with her grandchildren and playing Triominos and the card game Hand and Foot with them.

Nona is survived by her children Edward Jr. (Karen), Thomas

She was predeceased by her husband Ed in February of 2018.

Nona will always be remembered for her quick wit, wisdom, and humor.

A Mass of Christian Burial will be celebrated on Saturday, December 29, 2018 at 10am at St. Joseph's Cathedral on Allen Street in Burlington.


To order memorial trees or send flowers to the family in memory of Theresa May "Nona" Irish, please visit our flower store.