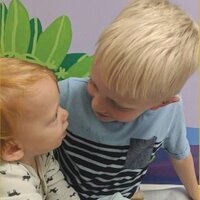 North Hero - Theodore William Maltais, 5, and Nathaniel Edward Maltais, 1, were called to God in a tragic accident when their home was lost to fire on October 19, 2019.

Theodore, born March 10, 2014, was full of spunk and made it his mission to transport you to a world of wonder within his imagination. Bringing his imagination to life for those around him was such a part of his daily existence that he had unique and special connections with every person he met. After your journey through imagination with him, you could always count on his smile and the warmest, "biggest" hug to comfort you and warm your soul, on even your darkest days. Theo loved art, music, dance (he had super sweet moves) and his family, teachers and friends. The love he had for his own life and those in it was eclipsed only by the love and wonderment he had for his baby brother. Theo was a fierce protector and loving caregiver of Nathaniel and their bond was apparent to everyone who knew them.

Nathaniel, born October 31, 2018, had so much love for a little one. He loved people and music. Thane loved to bounce and dance to any song that came on. He was an absolute light to everyone who knew him. His cuddles and smiles were infectious and brightened everyone's days. Thane's little personality was just starting to take shape and it had a healthy portion of mischief in it. He had just taken his first steps and was always curious about where those could take him. He was always looking for something to climb on or into and pride lit up his face whenever he was successful. The times he was thwarted by either Mom or Dad would find him motoring back in, face set in determination, using both hands and one leg to scooch along with surprising speed or running in his walker to achieve ramming velocity before smashing into his chosen target. He loved his Mommy and Daddy and his big brother Theo, whom he saw as his hero from the moment he was born, and was always sure to show it with wet kisses and "hiiiiiii's".

Services to honor the boys will be held at St. Paul's Church in St. Albans, VT at 2pm on Thursday, October 31, 2019. In lieu of traditional funeral attire, to honor the boys, the family requests everyone to dress in their favorite super hero attire.

To order memorial trees or send flowers to the family in memory of Theodore and Nathaniel Maltais, please visit our flower store.