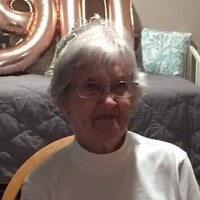 On April 9 2021 Teresa (Souliere) Perrault departed this world at her home in Essex Junction. At the age of 92 she was ready to make a shift to her next adventure with the Lord and her beloved husband George “Pin” Perrault. Mother Teresa( as her daughter Jacqueline loving called her) was a woman with a quiet private nature who could surprise you with her playfulness and humor. She was a one of a kind type of person and her presence will be sorely missed. Teresa was born in Orleans Vermont on February 9,1929 into the Souliere Family .Her parents Juliet (Lussier) Souliere and Dalphus Souliere had a lively brood of 11 children. Teresa was the 7th child. She had a deep love for her siblings . The Souliere children and their mother Juliet provided Teresa with strength and humor over the 92 years of her life. Teresa was a strong soul . When times got tough she fell back on what we lovingly referred to as her “Souliere Power”. On June 9 1951 she married George “Pin” Perrault at St. Theresa’s church in Orleans Vermont. They eventually moved from Orleans Vermont to Champion Ohio where they lived for nearly 20 years. Most of her years in Ohio were spent as a stay at home mom to her two daughters Michele and Jacqueline. The Perrault’s took many adventures in the summer traveling in their little camper with their two daughters all over the US and Canada. They were never without their poodle Jacques. Although they went many places in that tiny camper they always made their way back to Vermont. In 1974 they sold their home in Ohio and moved back to Vermont. At that time they opened up an auto parts store (Northwest Auto Parts) in Milton and Teresa entered the world of auto parts . Although her primary job was bookkeeper you could often find her helping out the customers in the front of the store. She enjoyed owning the store and worked there until her retirement in 1994. In retirement Teresa helped Jacqueline raise her grandchildren. At the age of 80 she went on an adventure to Italy which she often referred to as a trip that changed her life. She stayed active as a Red Hat Lady and sewing with a group of friends that she referred to as “Her Ladies”. In 2017 she moved in with her daughter Jacqueline. For the past four years the two of them were always together. They loved each other with their whole hearts often referring to each other as buddy. Teresa is survived by her two daughters Michele(Andy) Dana of Highgate and Jacqueline Carroll of Essex; grandchildren Rachel (Greg)Schuchart ,Serenity(Vic) Paez and Isaiah Martell; a very special great-granddaughter Gianna Paez( whom although they had never met in person due to Covid. . . was the greatest joy at the end of her life) ; her two very special cats Honey and Hazel and her very amazing companion Monica Moran( who made Tuesdays and Thursdays her favorite days of the week); and her siblings Carmel Souliere and Beebe Souliere. She was predeceased by her husband of 50 years George(Pin) Perrault, Parents Dalphus and Juliet (Lussier) Souliere; siblings Gassy Souliere, Gilbert Sawyer, Marc Collette, Joe Souliere, Rachel Fox, Ross Souliere ,Sab Souliere, Reggie Souliere; and her very special grandson Jude Martell. A funeral Mass will be held on April 27, 2021, 11:00 AM in St. Pius X, Catholic Church. Burial to follow in Milton Village Cemetery. For those who wish to leave an online condolence please visit www.minorfh.com
To order memorial trees or send flowers to the family in memory of Teresa Perrault, please visit our flower store.