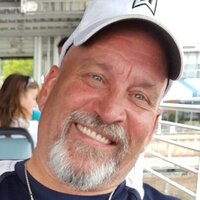 Milton, Steven R. Cherrier, 57 of McMullen Road, passed away peacefully in the VT Respite House in Colchester in the presence of his loving wife on Sunday evening, July 30, 2017.

Steve was born November 27, 1959 in Burlington, the son of the late Lawrence and Beverly Turner Cherrier. He had worked as a printing press operator for over 30 years until his health forced him to retire.

On July 3, 1993 he married Lorraine Martell in South Burlington.

Steve loved music, in particular the sounds of the 80's. He enjoyed his backyard as well as time spent fishing, but primarily he will always be remembered as a giving person and will be truly missed.

He is survived by his wife, Lorraine of Milton; and his children, Jourdan Cherrier of Florida, Matthew Cherrier of Burlington, Eric Loesch and fianc, Tonya of Milton and Michael Loesch of Milton; his grandchildren, Dustin, Ciera, Logan, Molly, Christian, Heaven and Jude; 3 great grandchildren; his nieces and nephews, Emily, Chentel, Brittany, Edward, Adessa, Rachael, Serenity and Isaiah; his brothers; Larry Cherrier and wife, Connie of Vermont and Florida, Edward Cherrier of Colchester, Michael Cherrier and wife, Sandy of South Carolina; and his sister, Sue Bohen and husband Todd of Milton.

Besides his parents, he was predeceased by his brother in law, Bill Martell in 2017.

Visiting hours will be held on Saturday, August 5th from 2 to 4 pm with a service held at 4 pm in the Minor Funeral Home, Route 7 in Milton. Burial will be held at a later date.

Memorial contributions may be made to the American Cancer Society, 55 Day Lane, Williston, VT 05494-1460


To order memorial trees or send flowers to the family in memory of Steven Roy Cherrier, please visit our flower store.