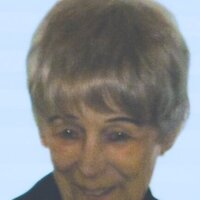 Milton - Shirley Ann Adams, 81, made the journey to her "heavenly home" to be with the Lord on Sunday October 6, 2019 at the University of Vermont Medical Center in Burlington after a long, courageous battle with cancer.

Shirley was born in Norton VT. to Frederick and Inola Henry.

She was married to Richard Adams who predeceased her in 1990.

Shirley had worked for Vermont Furniture Design for many years, retiring in 2015.

She was involved in the community youth organization, Christmas baskets, fireman's bingo and teaching Catechism.

She was a loving, compassionate, caring person, a devoted Catholic, an avid reader and she loved crossword puzzles, watching Jeopardy and spending time with family. She will be dearly missed.

She was predeceased by her sister Bertha O'Keefe, her brother Ned Henry and her companion Larry Squires.

A Mass of Christian Burial will be celebrated on Thursday, October 17, 2019 at 11 am at St. Ann Catholic Church in Milton.

To order memorial trees or send flowers to the family in memory of Shirley Ann Adams, please visit our flower store.