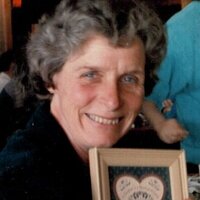 Colchester/Milton
Ruth Medlar Cannon, 82, of Milton, passed away February 13, 2017 in The University of Vermont Medical Center in Burlington following a long illness.

Ruth was born on June 17, 1934 in Burlington, VT the daughter of the late Frank and Myra Campbell Medlar. She was the youngest of 6 children.

Ruth married William Cannon February 5, 1966 in the Cathedral of the Immaculate Conception in Burlington. They celebrated their 50th anniversary last year with their children and close family at their home in Malletts Bay.

A "Stay at Home Mom" to their 3 children, Gail Chauvin of Colorado, James Cannon of Milton, and Kathleen Cannon of Westford she was very involved in volunteer programs for the handicapped, including The Kids at JayCee Park, and religious education for the handicapped. She also enjoyed gardening and working outdoors as much as possible.

Ruth is survived by her loving husband, William "Bill" (former Postmaster) of Milton, and their 3 children, Gail and her husband Jim, Jim and his wife Karen, and Kathy, as well as her sister, Anita Shea, and many nieces and nephews.

She was predeceased by her brothers, Howard, Richard, and Erald, and her sister, Marilyn.

As per Ruth's wishes there will be no funeral services.

In lieu of flowers, donations may be made to The International Rett Syndrome Foundation; www.rettsyndrome.org, Rettsyndrome.org. 4600 Devitt Drive Cincinnati OH, 45246 or 1-800-818-7388.

To order memorial trees or send flowers to the family in memory of Ruth Medlar Cannon, please visit our flower store.