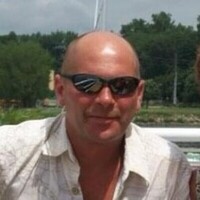 It is with the heaviest of hearts that we announce the passing of our beloved husband, father, brother and uncle, Rodney J Straight, 56, of Berlin, VT. He succumbed to complications of his 3 ½ year battle with lung cancer. Rodney was born July 20, 1965, in Burlington, VT to Robert and Genevieve Straight. He is survived by his partner of 33 years, Marie L Rock and daughter and family, Sierra, Garrett and Carter of Plainfield, stepdaughter and family, Ashley, Goober and Bryana of Grand Isle, brothers Robert and Sue of South Hero, Richard and Leandra of South Hero, Ron and Judith of Alburg, Randy of Berlin, and nephews that were near to his heart, Keith and Rob. He will be sorely missed by all of us. After graduating Colchester High School in 1983, Rodney joined the Guards. He was proud of his service to our great country. Rodney later spent his 30-year career as a journeyman for Local 693, a career he excelled at, until his illness sidelined him in 2018. As an avid outdoor enthusiast, you would often find Rodney hunting, fishing, camping, boating or mowing; all activities that he enjoyed greatly. He was a true family man, building a life that was surrounded by his closest family and friends whenever he had the opportunity. Rodney was the hardest worker of them all; a man who didn't stop working until the sun went down. After a long day of work, you might find him sitting by the fire staring off into space, thinking about what project he was going to accomplish next. He was generous, loving, kind, had a large sense of humor and the biggest heart. Please join us on Sunday between the hours of 12PM and 2PM at the Minor Funeral Home in Milton, VT to celebrate his life. A Prayer Service will be held at 2PM In lieu of flowers, you may make a contribution to Grand Isle Rescue or your local humane society in his memory.
To order memorial trees or send flowers to the family in memory of Rodney J. Straight, please visit our flower store.