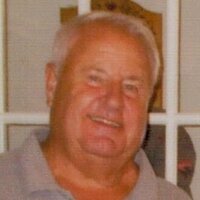 Growing up in Orleans, Bob graduated from the Orleans High School.

There he played basketball, baseball, and enjoyed hunting and fishing / trapping in the Barton River. His first jobs were working in the Anderson Mill and caddying at the Orleans Country Club. After High School Bob enlisted in the US Air Force, and served 4 years in Japan.

On January 1, 1968, Bob married Donna Cook at St. Francis Xavier Catholic Church in Winooski. He very much liked working for Northern Airways at the Burlington International Airport and the friends he made there for 11 years. Following the airport, Bob was employed by IBM in Essex, where he worked for over 25 years, and made many more friends before retiring in 2006.

Bob is survived by his wife of 50 years Donna (Cook) Langdeau of Essex, his son Gary Langdeau and his wife Debora of Milton and their children Sydney, Casey and Kiersten, his daughter Brenda Murphy and her husband Shawn of Georgia and their children Connor and Teagan, his sister Joanne Lawes and her husband Carroll of Williston, Donna's siblings and many nieces and nephews and dear friends.

In honor of Bob's parents, memorials may be made to the Alzheimer's Assoc., Vermont Chapter, 300 Cornerstone Drive, Suite 128, Williston, VT 05495


To order memorial trees or send flowers to the family in memory of Robert Lionel Langdeau, please visit our flower store.