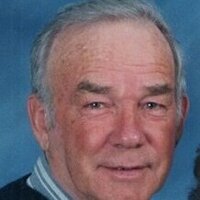 surrounded by family as he peacefully left this world and his journey with Alzheimer's Disease.

Dick and his twin brother Bob were born in Burlington, VT to Ovila and Eva(Caron)Boudah on

December 7th, 1934. He was a graduate of Burlington High School. Dick's father passed away

at a young age leaving his mother Eva to raise 5 boys as a single mother. The boys spent

much time at their grandparents farm in Westford as they were growing up. It was here that

Church in Fairfax, VT in 1954. Dick enlisted in the Vermont Air National Guard in 1952. He was

stationed here in VT with the Green Mountain Boys 158th Tactical Fighter Group. He was a

Master Sergeant Crew Chief on the flight line. He retired from the VTANG in 1987 serving over

After retirement, Dick and Martha traveled the country with their pickup camper. They traveled

to all the continental United States including driving to Alaska. Dick was a master of many

trades. He was a skilled woodworker and built the family home in Essex. He could fix any car

or re-build it from the ground up. Dick loved to fly RC airplanes, putter in his woodworking shop

and especially enjoyed hunting and fishing with his twin brother Bob.

David and Lauri Boudah of Greenwood, SC; Debra and Stuart Toof of Fairfax; James Boudah of

Westford; Richard Boudah, Jr. of Fairfax, and Thomas and Kim Boudah of Colchester. He also

Fairfax. He will be missed by many cousins, nieces and nephews. Dick was predeceased by

his parents and brothers William and Donald.

Visiting Hours will be held on Saturday, May 20, 2017 from 9 to 11:30 am in the Minor Funeral Home, Route 7 in Milton. A Graveside Service with Military Honors will follow at Noon in St. Luke's Cemetery, Route 104 in Fairfax.

Association Research studies focusing on advancing the cure and treatment of


To order memorial trees or send flowers to the family in memory of Richard John Boudah, Sr., please visit our flower store.