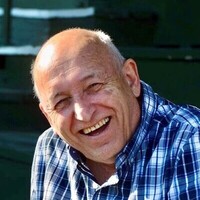 It is with heavy hearts and deep sadness that we announce the passing of Richard A. Normand on October 28, 2021 at the McClure Miller Respite House. Dick was born August 23, 1945 to Wilfred and Leona Normand in Berlin, NH. He graduated from Berlin High School & Notre Dame School in 1963. After graduation, Dick enlisted in the Navy on July 18, 1963. Dick was in charge of Ordinance on a Navy Sea Plane and was stationed off the coast of Vietnam. He was honorable discharged July 17, 1966. Soon after, Dick came to Burlington, VT to apply for a job at GE. He was hired on the spot and started working on the second shift the same day he was interviewed. He worked for GE from 1966 to 1970. He then began his 32 year career with IBM working most of that time in the Mask House, retiring in 2002. While working at GE, Dick met the love of his life, June (Racicot) Normand. They met at The Red Dog, a local dance place, where they both enjoyed dancing. They married on Feb. 24, 1968. Anyone who knew Dick and June knew that they did everything together. When asked what their secret to being married for 53 happy years was, they would both smile and say "forgiveness and love"! Dick and June have two sons Rick and Chad. They lived in the New North End of Burlington for over 32 years and moved to Shelburne after Dick retired from IBM. They loved living next door to their son Chad, and wife Gina, especially after their grandson Riley was born. They made so many memories with Riley and he kept them very active. They tried to never miss a basketball, baseball or soccer practice or game, skateboarding event or any other function that he was involved in. Riley kept them both busy and brought so much joy to their retirement years! After Dick retired he had fun exploring different part time jobs.....from working at Kwiniaska Golf Course, driving for Fed Ex, working at Homeland Security at the airport, and he even going back to work at IBM part time as a Gate Guard which he loved. He enjoyed greeting everyone in the early morning hours with a big smile and contagious laugh. His last job at IBM was in servicing the Distribution Centers. He loved visiting and making people smile. In April of 2012, Dick finally officially retired. Dick was always happy and loved people and making new friends. One of his hobbies that he loved to do was bowling. He bowled on a senior league at Spare Time on a team named "Bowling 4 Fun". He not only enjoyed bowling, but loved connecting with his teammates; smiling, laughing, and joking. What a jokester Dick was. Another fun activity that Dick liked to do with June was visit the casinos. Dick did not care if he made money; he went to meet and visit with new people from all over New England. Connecting with people and making them laugh was Dick's super power. Dick was a true Patriot and loved his country, even though serving his country in Vietnam changed his retirement years forever, due to the exposure of Agent Orange. He still said he would do it all over again because of his love for this country and our freedom! In fact, he even talked his wife June into joining him to serve in the Vermont State Guard Medical Corps Division for six years. Dick leaves behind his son Rick (Donna) and granddaughter Chelsea (Dana) and grandson Hunter, all from PA, and son Chad (Gina) and grandson Riley from Shelburne, VT. Dick also leaves behind his brother Paul (Polly) from OH, brother Rene (Elaine) from NH, brother Robert (Sherry) from NH, brother David from NH, sister Susan Boucher (Jim) from NH and brother John from NH. He was predeceased by his brother Leo of Berlin, NH and his parents Wilfred & Leona Normand. He also leaves behind Aunts, Uncles and many dear neices, nephews and cousins. Dick was on Baird 4 at UVM Medical Center for seven months. The family would like to thank some of the special nurses and LNA's that cared for him there for so long...too many to name, however Jill stole the family's and Dick's heart. The last seven weeks of Dick's life, he was at the McClure Miller Respite House. The love and the care that he received was nothing like the family had every seen. The peace, kindness, and the over and above thoughtfulness from all of the staff was off the charts. The Respite house is so full of love and kindness and details were never missed. A special thanks to June, Sierra and Lynn at the Respite House for their wonderful care of Dick and his family. If you are so inclined, in lieu of flowers, the family would ask that all donations be made to the McClure Miller Respite House in Dick's memory. Please send donations to The McClure Miller Respite House, 3113 Roosevelt Highway, Colchester, VT 05446. Please join the family as we celebrate a life well lived. Visiting hours will be held on November 6, 2021 at the Minor Funeral Home (237 Route 7 South, Milton, VT) from 1-3 pm. A memorial service will follow at Minor Funeral Home at 3pm.
To order memorial trees or send flowers to the family in memory of Richard Albert Normand, please visit our flower store.