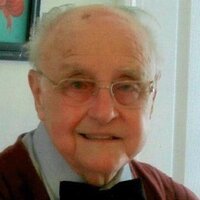 North Hero, Grand Isle, So. Hero and the VT Air Guard have lost a rather good guy.

He was a veteran of the Army Air Corp during WWII and the Korean Conflict and was employed as a civil service employee for the Air Guard, retiring in January of 1985. Following retirement, he was appointed by the Gov. as a member of the State Veteran's Board for a 12 year period. He belonged to the Congregational Church of So. Hero, Isle of Patmos Masonic Lodge, the VFW and the American Legion.

Dick married Janet Atkins on May 3, 1947 and they are the loving parents of three girls, Rebecca, Polly and Laura.

His grandchildren were very special to him and loving. After retirement, Dick and Janet travelled extensively and enjoyed the many wonders of our Great Nation. He relied on the good judgement and intellect of a beautiful and gracious Janet, they were a great and loving team.

For those who wish, memorial contributions may be made to the Vermont National Guard Charitable Foundation, 789 VT National Guard Road, Colchester, VT 05446.

Visiting hours will be held from 10-11am on Saturday June 16, 2018 in the So. Hero Congregation Church Hall with a Funeral Service following in the Church at 11am. Burial will follow in the Grand Isle Cemetery with full military honors.


To order memorial trees or send flowers to the family in memory of Richard Walton "Dick" Hazen, please visit our flower store.