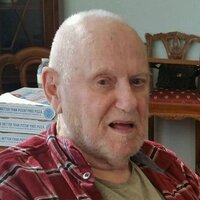 Colchester - Richard H. Ruell Sr., 88, died peacefully on Saturday October 15, 2016, with his loving family by his side, at the Vermont Respite House in Colchester.
Richard was born on February 13, 1928 in Burlington, the son of Walter and Marion (Bessette) Ruell.
He served his country as a Civil Engineer for over 21 years, in the U.S. Air Force, during WWII, Korea and Vietnam.
He married Betty Jane Rivers on March 12, 1945 in the Cathedral of the Immaculate Conception, in Burlington.
Richard is survived by his children Michael Ruell of Winooski, Richard Ruell Jr. of Plattsburgh, David and his wife Lynn Ruell of Rochester, NY, Suzzanne and Bernice Turner of N.C., Larry and Brenda Ruell of Rochester, NY, Walter Ruell of N.C., Donna Eisenman of N.C., Jean Spence and Robert Ruell, both of Colchester, 12 grandchildren and many great grandchildren, nieces and nephews. He was predeceased by his wife Betty in 2003, his infant brother Robert and his brother Walter, who was killed in WWII.
Visiting hours for Richard will be held on Thursday, October 20, 2016 from Noon until 2pm.
A graveside service will follow in the Ft. Ethan Allen Cemetery in Colchester.

To order memorial trees or send flowers to the family in memory of Richard H. Ruell Sr., please visit our flower store.