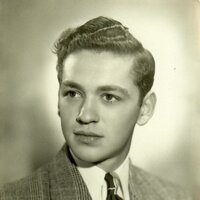 Raymond Joseph Berard passed away early Saturday on February 20, 2021 after a brief stay at the Respite House.

Raymond was born April 2, 1932, Shoreham, VT. He was one of 12 children, the son of Ulric and Zepherine (Angers) Berard.

Raymond married Jacqueline Alice Boise on September 28, 1957 and together they began their family.

Raymond was a man of strong faith and a lifelong church member. He was an active member of The Full Gospel Men's Fellowship. He was a devoted family man and husband and was very proud of his children.

He was a bookkeeper for several local businesses and owned and operated a few grocery stores. Most recently, he had a small engine repair service until his passing.

He was President of Fish and Wildlife for many years and also Fire Warden for the town of St. George. He was an avid snowmobiler, fisherman and gardener who was known for growing delicious raspberries.

Although he could come across as gruff at times, he had a very loving and tender side.

Raymond also leaves behind several nephews and nieces, including a special nephew, Allan Berard, and niece, Jackie Yates, and brothers, Adrien and Edouard along with many special friends and acquaintances.

The family would like to offer a special thank you to Cheri Neill for the past sixmonths, for her kind and loving care she provided for dad.

Thank you to the UVM Health and Hospice Program, especially to Lisy, Carrie and Kelsey who with them, dad would not have been able to remain in his home.

In lieu of flowers, memorial contributions may be made to: Fish and Wildlife Trust Fund. Vermont Department of Fish and Wildlife, 1 National Life Drive, Davis 2 Montpelier, Vt. 05620 802-828-1000.

Will you let Me hug your heart

with My forever love, and tell you

what's on My mind for you today?

Oh dearest one, there's so much

you don't know, and so much I want to

open up for you.

I hear your complaints in the night,

your sighs in the noontime,

and your brooding murmurings.

My arms are open wide to hold you,

to encourage you, bless you,

Will you meet My embrace

to leap inside where I can

speak to you and assure you

that all is well?

My arms are open.

To order memorial trees or send flowers to the family in memory of Raymond Joseph Berard, please visit our flower store.