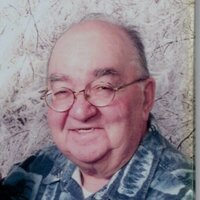 Georgia - Raymond James Alger, 78, died peacefully on Tuesday December 13, 2016 at the University of Vermont Medical Center in Burlington with his loving family by his side.
Raymond was born on April 23, 1938 in Colchester, the son of James and Bernice ( Pecor ) Alger.
On February 20, 1960, he married Gladys Burns in Essex Center.
He served in the U.S. Navy then transferred into the U.S. Army where he served for over 20 years. Following retirement he worked at Dick Mazza's Country Store and for the Milton School Dept.
He love to hunt, fish and enjoyed gambling.
His family and grandchildren, whom he adored, were the center of his life.
In addition to his loving wife Gladys, of over 56 years, he is survived by his children Patrick Alger and his wife Judy of Milton and Rebecca Alger of Highgate Center, by his 7 grandchildren, 8 great grandchildren, by his brothers Carl Alger of Burlington and Robert Alger of Georgia, and by several nieces and nephews.
He was predeceased by his granddaughter Anna Marie Alger in 2013 and his brother Reggie Alger.
Visiting hours will be held on Monday December 19, 2016 from 11-1pm in the Minor Funeral and Cremation Center in Milton with a funeral service following at 1pm.


To order memorial trees or send flowers to the family in memory of Raymond James Alger, please visit our flower store.