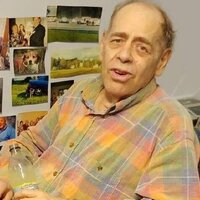 Hyde Park, VT - Peter Henry Spear, 74, passed away Saturday October 31, 2020 at the Copley Hospital in Morrisville, with his niece Alana by his side.
Peter was born on November 8, 1945 in Waverly, NY the son of Helen (Emmons) and Clyde Guy Spear II. He attended and graduated from Spencer Central School in Spencer, NY.
He was an exceptional baseball player but instead of pursuing that, he joined the NAVY. He was on the USS Constellation aircraft carrier, where he learned photography, and was the photographer for the ship and personnel. He left the Navy in 1967.
Uncle Peter then moved to Montpelier and joined his family (His Mom, Dad, Sister Phoebe and her daughters and his grandmother Phoebe (Bush) Emmons) there in a home of the Dean of Vermont College, his father.
Peter went on to have his own Photography business, PS Graphics. He took photos for peoples weddings, at races (lots of beautiful cars and women there!) and designed bumper stickers. These are where his humor shown through his work.
He was a punny guy! Always taking the time to entertain others with his sense of humor, just like his Father and brother Chip would do.
Peter worked at Country Camera in Montpelier, Bombardier as warehouse manager, Electrical work at Norway and Sons and was a Flagger for many years.
Uncle Peter loved his pets like as they were his children. He had Satchel that he named after baseball player Satchel Paige, and Blackie (brown and white dog) after Blackie Stone. He loved Beagles! His longtime cat named Bart. He rode Honda motorcycles and had a love for sports cars too. He spent a lot of time at mud bogs and Watkins Glen.
Peter is survived by his nieces, the Jahnke girls, Ginger Farineau, Jennifer Roseoff and Alana Vaillancourt and her husband Daniel, and Kathleen Genovese and her husband Joel, his nephew Frank Brackin and his wife Michelle and cousins Lori Maratea and Candice Emmons and their children and grandchildren. He was predeceased by his sisters Faith and Phoebe and brother Chip (Clyde Guy Spear III), his Mom and Dad and all of his beloved pets.
Peter had a home of his own for many years in Plainfield, Vermont and loved his neighbors there and taking part in the Martin Meadow Association and the picnics and comradery. He had a lot of friends in the central Vermont community and although he didn't see a lot of them lately, he spoke very fondly of you all right up to the end.
He loved the Red Sox and the Ravens!
In lieu of flowers in memory of Peter, please donate to Potters Angel's Rescue at www.pottersangelsrescue.org
There will be no services, Peter and his sister Phoebe will be buried together in Spencer, NY in the spring.


To order memorial trees or send flowers to the family in memory of Peter Henry Spear, please visit our flower store.