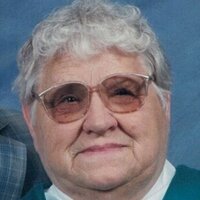 Pearl Ilene Whitney-Covey, 88, a former Milton resident, passed away peacefully on Friday, June 16, 2017, with her loving family by her side at the Starr Farm Nursing Center in Burlington, where she had resided for the last eight years.

Pearl was born May 30, 1929 in East Monkton, the daughter of the late Alfonzo and Minnie Downs Brace.

A lady who took pleasure in helping others, Pearl was a Senior Soldier of the Salvation Army in Burlington for 15 years where she also taught Sunday school. She served as an RSVP Volunteer as well as a volunteer for Champlain Valley Agency on Aging where she was a member of both the CVAA Community Meals Program and Arrowhead Seniors in Milton where she also belonged to the United Church.

She is survived by her children, George and Sharon Whitney of Proctor, Shirley Mulliss of Winooski, Joyce LaBelle of Essex, Larry and Betsy Whitney of Milton, Barbara and Robert Merchant of Burlington, Marjory and Michael Burt of Milton and Francis Whitney of Burlington. Several grandchildren, Great Grandchildren, great great grandchildren and many nieces and nephews. She was predeceased by her son in law, Steve Mullis; daughter in law, Sharon Whitney; Brothers, Harold, Howard and William Brace and her sister, Annabelle Hayes.

Visiting Hours will be held from Noon to 2 pm on Wednesday, June 21, 2017 in the Minor Funeral Home in Milton. A service will be held at 2 pm by the Reverend Jeffrey Cornwell in the funeral home. A reception will immediately follow at the Arrowhead Senior Center on Middle Road in Milton. A private burial will be held in the Shelburne Village Cemetery at a later date.

A special thank you to the staff of Starr Farm Nursing Center for their kind and compassionate care extended to Pearl while she resided there.

In lieu of flowers, contributions in her memory, may be made to the Chittenden County Humane Society, 142 Kindness Court, South Burlington, VT 05403 or to the Arrowhead Senior Center, P.O. Box 785, Milton, VT 05468.


To order memorial trees or send flowers to the family in memory of Pearl Ilene Whitney-Covey, please visit our flower store.