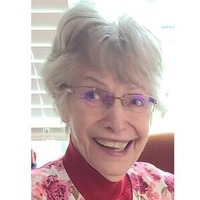 Shelburne, VT - Patricia “Pat” Velma Vachon, a longtime resident of Essex, Vermont and The Villages, Florida, passed away peacefully in the company of loved ones at The Arbors at Shelburne on July 23, 2022. She lived 87 delightful years. Pat was born on February 3, 1935, in Madawaska, Maine - the daughter of Leona and Rene Michaud. She grew up in Madawaska with her brother Roger and her sisters Dorothy, Rena, and Jeanine. Pat married the love of her life Roger Vachon, a Flyboy stationed at the former Loring Air Force Base in Limestone, Maine, on August 27, 1955. Pat, Roger and their three children - Norman, Elaine, and Julie - moved to Essex, Vermont when Roger began his engineering career at IBM. Once the kids were grown up, Pat worked at IBM and then worked at Saint Michael’s College. When her two siblings and their spouses - Dorothy & Dean and Roger & Aline - moved to The Villages in Florida, Roger and Pat followed and became snowbirds in the winter. During the summer families and friends would gather at their waterfront cottage on Lake Carmi. Eventually they became full-time Floridians. Pat loved to shop and spend Saturday mornings visiting garage sales. Purchasing items on sale brought her happiness and joy. She was generous in her giving to others. Pat was an avid card player. She played for decades in two bridge clubs. Every day if she could, she would play Crapette, a French double solitaire card game. When family and friends were in town cards, quarters, and laughter filled the house. Pat was such an excellent cook that a family cookbook was created to share her favorite recipes. She created wondrous memories hosting themed parties – a tradition being carried on. Her most precious quality was the love she bestowed on her family. Always willing to step in and help as needed. Her grandchildren loved her!! Mere had an unconditional love for her grandchildren. Each of us has special memories. Forever we will have a special place in our heart for “Mrs. Vachon,” “Patricia,” “Pat,” “Patty,” “Mom,” “Mumsie,” “Mere,” “Sister,” and “Friend.” Pat is survived by her children: Norman Vachon and his wife Sohier of Windsor, California, Elaine and her husband Bill Nyhagen of Essex, and Julie and her husband Larry Reynolds of Westford; her eight grandchildren: Kristina, Peter, Natalie, Kelly, Lisa, Erik, Stephanie, and Evan; and her three great-grandchildren: Noula, Melania, and Rhys. Her sister Dorothy and brother n’ law Dean Corbett of The Villages, FL, sister n’ law Aline Michaud of The Villages, FL and many nieces and nephews that she adored. Pat is predeceased by her husband Roger of 67 years, her parents Leona and Rena Michaud, her sisters Jeanine and Rena, and her brother Roger and, nephew James Copping. For four and half months, Roger and Patty (as she was called at The Arbors) were able to live together at The Arbors. It was a loving and special time together. The staff of both The Arbors and Bayada Hospice provided such wonderful care - evident by her smiles and laughter. On Patty’s behalf, we send a very special “thank you” and a “see you later” to her new best friend Leila. A celebration of Patricia’s life took place at the Mountain View Cemetery in Essex, Vermont on July 29, 2022.
To order memorial trees or send flowers to the family in memory of Patricia Velma Vachon, please visit our flower store.