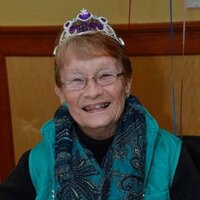 "And though she be but little, she is fierce." - Shakespeare


Pam Dobson Allen of South Hero said farewell to her physical body on Friday, December 25, 2020, surrounded by the fun and loving blended family she created with her husband of 36 years, Ray W. Allen. She was 75. Although Pam left her tiny frame behind, we know she took her feisty spirit with her so we will always be able to feel her larger-than-life energy.


Pam was the "Domestic and Agricultural Engineer" (a.k.a. Mama Apple) of Allenholm Farm, working alongside Ray (a.k.a. Papa Ray) for nearly 40 years as they managed the rollercoaster ride that came along with operating the oldest commercial apple orchard in the State of Vermont. They endured decades of harvests and Pick Your Own apple seasons, made thousands of their famous Papa Ray's pies (Pam logged more hours in the MFGDPR than anyone!), and welcomed countless visitors to what has become one of the most popular agritourism destinations in New Englandin large part due to Pam's passion for agriculture and educationand making people happy. Pam was also dedicated to all the animals who called the Farm their home. From Willy the famous donkey and Fergie the Scottish Highland cow to Sylvana the Haflinger horse and Jeannine, Rosie, and Romeo the sheep, so many animals benefited from Pam's love for all living things. It wasn't uncommon to find diapered baby goats running around her living room, tiny chicks under heat lamps in her bathroom, fluffy bunnies being fed in the kitchen, and countless other convalescing critters, and even helpless house plants, being weaned or nursed back to health thanks to her care.


In addition to her role as Mama Apple at the Farm, Pam was very active in the community and loved meeting new residents and making new friends. When she moved to the Islands in 1974 with her young family, she got involved right away, volunteering as a Girl Scout leader, teaching sewing through 4-H, and later working at Folsom Educational & Community Center as a teacher's aid in the special education classroom. She also owned and operated her own clothing and gifts store, Post & Beam Dry Goods, for many years. Pam was a founding member and Chair of the AppleFest committee for 20 years, the oldest member of the 4th of July Parade Committee (and master judge wrangler), one of the starting members of the Vermont Farms agritourism organization, and a member of the board of directors for the Lake Champlain Islands Chamber of Commerce. The most cherished gig on Pam's list of volunteer activities, however, was acting as "Snack Cart Lady" at Camp Ta-Kum-Ta, where she got to speed around the camp grounds in a golf cart doling out sugary treats, cold drinks, and other snacks to the anxiously awaiting campers, all of whom absolutely adored her and showered her with hugs every time she visited.


Pam also had a lifelong love of the theater, and as much as she enjoyed going to see all kinds of shows on Broadway, off Broadway, off off off off Broadway, and everywhere else, she loved being on stage even more. She joined South Hero Players shortly after moving to town and performed her very first starring role in the mid '80s, taking the stage as Maggie in "The Man Who Came to Dinner." Her spot-on facial expressions and flawless comedic timing were also showcased when she stole the spotlight as Cherie in "Bus Stop." She was involved in dozens of community productions, but will always be the fondest of her role as Gold Crust Gertie, the toothless and unkept prospector-narrator in "How the West Was Fun." Pam was also a co-founding member of the Route 2 Radio Troupe, bringing to life the old-fashioned melodramas her father wrote in a traditional radio show style.


Although Pam did love the Islands and everything that kept her so busy, she relished her relaxation and travel time spent with Ray, family, and friends. She was an avid cruiser, visiting many Caribbean Islands and the Panama Canal, and her other adventures included a Colorado River rafting/camping trip, a two-week excursion through South America, and many many road trips with Ray on their motorcycle. Her Harley-Davidson leather jacket and boots were a kid's size, but she lived life in them just as large as any other H.O.G. Member. She and Ray also spent many years flying around the states in their little Cessna 172 airplane, which she too learned to fly, so that if anything happened to Ray, she could land the plane herself. That was so like Pam. She was always okay with being a copilot, but also proved time and time again that she was more than capable of being a pilot herselfand flying solo.


When asked how those closest to her would describe Pam, many would say she was one of the most welcoming people they had ever met. She was constantly opening her door and home to her daughters' friends, her husband's vast network of colleagues, her extended family, and anyone else who needed a place at the family table. She and Ray even operated a Bed & Breakfast for many years, hosting hundreds of out-of-town and local guests, who then also became family and friends. She's been named honorary grandmother, bonus mom, and godmother to so many, and has more bonus kids than any mother thanks to UVM's NR1 program (that's where the name "Mama Apple" began). Her house has two doorbells, but there was never really any need for them as most people just walked right in and were encouraged to make themselves at home. Grandkids and great grandkids made themselves right at home in her closet too, pulling her pint-sized clothes right off the racks in the best dress up scenario a kid could possibly imagine.


Pam meant so much to so many people and was assigned quite a few nicknames by her family. Along with being Mom to daughters Jennifer Inglis (and her husband Wayne) and Wendy Duval (and her husband John Larabee), she was Bonus Mom to stepson Ray C. Allen. She was also sister to Elizabeth "Buffy" Brown and Aunt Pam/Daisy P to niece Whitney Lowe (and her spouse Shannon) and Luke Doremus (and his wife Rachael and their children Max and Owen). She was Nanny to two grandchildren: Brittany Inglis and Ryan Inglis. She was Gram to five grandchildren: Brandon Allen (and his wife Michelle), Blake Allen, Andy Allen, Zack Allen, and Samantha Chagnon (and her husband Tom). And she was Pamma to six great grandchildren and a great niece: Taylor Allen, Leah Allen, Jake Allen, Charlie Chagnon, Todd Chagnon, Eddie Chagnon, and Charley Lowe. Pam was also known as Pom to three very special extended family members from Jamaica: Winston Waugh, Errol Walker, and Sylvan Tracey.


Pam wanted to send heartfelt thanks to her incredible care team at UVM Medical Center, including Dr. Christine Weinberger, Dr. Jessica Cintolo-Gonzalez, Dr. Harold Wallace, Dr. Maura Barry, Ashley Cohen RN, and all of the wonderful infusion bay nurses, all of whom made her feel safe and comfortable and like she was the only patient they had. She also wanted to thank the loving community of South Hero and all of her amazing friends for their open hearts and steadfast support, as well as Sylvie Breault for her decades of hard work and dedication to the Farm and family. Most of all, Pam thanks her amazing blended family for their unwavering care and unconditional love.


It was also important to Pam that everyone know how much she thoroughly enjoyed life, and that she focused on living as fully as she could inside each and every day. She adored her family and friends, and was well known for all the fun she brought to the table. She never missed an opportunity to use her unique wit and sharp sense of humor to deliver her own brand of sarcastic zings - wisecracks the family talks about as things only she could come up with or get away with saying. And it was definitely in everyone's best interest to never let her hear you call her cute!


Fly high, Pam/Mom/Rose/Daisy P/Nanny/Gram/Pamma/Pom. We thank you for your humor, your support, your strength, and your fire, and for showing everyone what it's like to feel unconditional love. You'll be missed so very much, but we're confident you'll somehow let us know that this final solo flight landed you in a beautiful place.

A celebration of Pam's life will take place in the summer of 2021.

Online condolences may be made to www.minorfh.com

To order memorial trees or send flowers to the family in memory of Pamela D. "Pam" Allen, please visit our flower store.