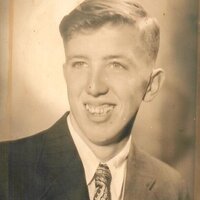 Essex Junction - Myron H. Woodworth, 86, passed away on Monday, May 27, 2019 at University of Vermont Medical Center in Burlington.

Myron was born on October 20, 1932 in Burlington, the son of Harold and Dorothy (Germain) Woodworth.

Myron held many jobs throughout his life, the longest being with IBM and the Chittenden Bank. He also worked in his earlier career as a carpenter, for Lamell Lumber, Wood Masters and as a home builder.

He also loved to hunt and fish.

Myron was married to Barbara Jean Meunier, who predeceased him in 1993.

He is survived by his sons Paul Woodworth and his wife Cathy of Essex Junction and Peter Woodworth of Milton. He is also survived by his grandchildren Nicholas and wife Candice, Nathan and his wife Kara and Tashaw Woodworth and her friend Jim Hesketh, and Melanie Woodworth,and by his great grandchildren Camlin, Caiden and Caraline,his brother Leland Woodworth, his sister-in-law Shirley Farnsworth and several nieces, nephews and his faithful buddy"Boy" or "Randy", his yellow lab.

In addition to his wife Barb, he was predeceased by his son Perry, both in 1993, his twin brother Byron and his sisters Norma Cutting and Barbara Deatle, by his brother-in-laws Ronald and Arthur Meunier, his sister-in-laws Angie, Doris, Aliceand Hilda

Visiting hours will be held on Thursday May 30, 2019 from 5-8pm in the Minor Funeral Home in Milton.

A Mass of Christian Burial will be held on Friday May 31, 2019 at 11 am at St. Luke Catholic Church in Fairfax.

For those who wish to leave an online condolence, please go to www.minorfh.com

To order memorial trees or send flowers to the family in memory of Myron Harold Woodworth, please visit our flower store.