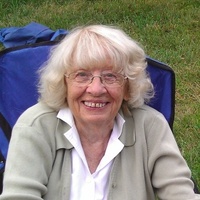 Rutland, Vt. Muriel L. Laliberte passed away October 13, 2022 in Rutland after a period of declining health. Muriel was born on September 12 in Chelsea, VT, the daughter of Ralph and Anna (Sweet) Coburn. Muriel graduated from Johnson State College and became an elementary teacher in various school systems with the most of her years in South Burlington where she was highly regarded by her peers and students. Muriel married J. Richard Laliberte in Chelsea, Vt on April 19, 1954. They made their home in Grand Isle where they owned Rousseau Brothers Chrysler dealership. Muriel loved driving those brand new Chryslers around. Muriel was active in the community and was the Library Commissioner. She was an avid reader. She had many good friends. She enjoyed spending time on their houseboat with Dick, tendering to her beautiful hollyhocks and peonies and other flowers, spending time on her front porch enjoying the view of the lake with friends and neighbors stopping by. She loved the ocean and had an old schoolhouse, PS29, that they converted into a cute cottage on Popham Beach where she invited her family. She enjoyed antiquing with her sisters and collected many beautiful pieces. She loved animals and had many dogs and cats and contributed to the Humane Society for years. She loved hosting weekly Hearts games with her family. Although she and Dick never had children of their own, she was a beloved aunt to generations of nieces and nephews. She made each and every one of them feel special like they were her favorite. She is predeceased by her husband, J. Richard (Dick), her parents Ralph and Anna, her brother Robert who died in World War II, sisters Jean Bayne, Lois Thompson, Patricia Widli, Joyce Gomez, her brother Irving as well as her brothers-in law Robert Thompson, Arthur Blanchard, and Joseph Widli. Muriel is survived by her sisters, Phyllis Blanchard of Florida and Greta & Phillip Griffin of Tennessee. Brother-in-law Ramon Gomez of Grand Isle and sister-in-law Vonna Coburn and numerous nieces and nephews. Visiting hours will be held on Friday, October 21, at 10:00 AM in the Minor Funeral Home, Milton, with a funeral service to be held at 11:00 AM. Burial will follow at the Grand Isle Cemetery.
To order memorial trees or send flowers to the family in memory of Muriel Lena Laliberte, please visit our flower store.