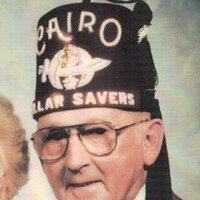 He had worked for many automobile dealerships in the St. Johnsbury area and the New England Power Company at Comerford Dam before retiring in 1988.

Milton served his country during WWII in the U.S. Army and was a member of the American Legion Post # 91 in Colchester.

Milt was also a member of the Passumsac Lodge # 27 of St. Johnsbury and enjoyed being a member of the Local Shrine Unit, Cellar Savers, at Cairo Shrine of Rutland, VT. He enjoyed square dancing, piano playing and working on Mr. Rick's Chuck Wagon for many years.

He was predeceased by his wife, of over 64 years, Anne Knapp in 2007 and by his brother Robert Knapp.

Milton's family would like to give very special thanks to the Staff and Doctors of Starr Farm Nursing Home for the excellent care given to him over the last 6 years.

Visiting hours will be held on Monday Sept. 11, 2017 from 4-7pm with a Masonic Service held at 7pm in the Minor Funeral Home in Milton.

A Funeral Service will be held on Tuesday Sept. 12th at 10 am in the Funeral Home with burial following in the St. Johnsbury Center Cemetery.


To order memorial trees or send flowers to the family in memory of Milton F. "Milt" Knapp Sr., please visit our flower store.