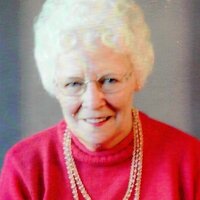 Mary was born November 21, 1925 in Richmond, the daughter of the late James and Geraldine Call Strong. Graduating from Cathedral High School in Burlington, she went on to work for Coleman's Pharmacy in Burlington. She later was employed and retired from the General Electric Armament Division in Burlington after 30 years as a Quality Control Inspector.

She was married to Angelo Boccio who predeceased her.

Mary is survived by her son William "Bill" Boccio and his wife, Sylvia of Essex Junction and her three grandchildren, Melissa, Jody and Anthony and two great grandchildren, Emily and Patrick; her sister in law, Carol Strong of Colchester and several nieces and nephews including James Strong, Patrick Strong and Ann Marriott.

She was predeceased by her siblings; James, Douglas, Bill, Pat and Joe Strong, Connie Curran and Barbara Hanlon.

A Mass of Christian Burial will be celebrated on Wednesday, April 24, 2019 at 10 am in St. Mark's Catholic Church on North Avenue in Burlington. Burial will follow in New Mount Calvary Cemetery on Plattsburg Avenue.

Visiting Hours will be held on Tuesday, April 23rd from 5 to 7 pm in the Minor Funeral Home, Route 7 in Milton.


To order memorial trees or send flowers to the family in memory of Mary Helen Boccio, please visit our flower store.