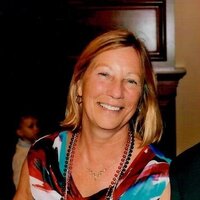 Marilyn M. Hamel, beloved Wife, Mother, Grandma,' Daughter, Sister, Aunt and teacher to so many, passed away peacefully at her home in North Hero, VT on August 14th at the age of 69.

Born in Cambridge, MA to Janet and Harold Mercer, Marilyn attended Wakefield (MA) High School where she met her best friend and the love of her life Paul.

She graduated from Skidmore College in 1970 and she and Paul were married later that year.

After a brief stay in Arizona while Paul finished his degree, they settled in Vermont and she embarked on a 30 year teaching career at Essex Middle School, where she impacted the lives of thousands of students and colleagues.

They welcomed their son Brad in 1977 and Marilyn became a bonafide "hockey mom" who vigorously supported all of her son's sports pursuits.

All roads led back to their special home on Lake Champlain, where Marilyn always seemed her happiest and most at peace.

She and Paul enjoyed traveling and seeking out new adventures, especially those that included their energetic and adoring grandsons.

She was taken from us long before her time and leaves behind her devoted husband of 48 years Paul, her son Brad, his wife Emily along with cherished grandsons Colby and Cormac, her Mother, Janet Mercer and she was predeceased by her father Harold. She is also survived by her brother Jim Mercer,

his wife Donna and nieces Jamie Preski and Lauren Mercer.

At her request, no service will be held and her family will hold a celebration in her honor.

In lieu of flowers, the family requests those seeking to make a donation please do so to a charity of their choice in her honor.


To order memorial trees or send flowers to the family in memory of Marilyn M. Hamel, please visit our flower store.