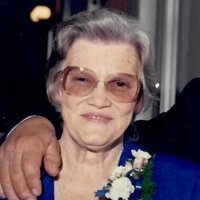 Fletcher - Margaret Minor, 88, died Friday April 3, 2020 at the St. Albans Health and Rehabilitation Center.
Margaret was born on April 14, 1931 in Fletcher, VT the daughter of the late Roger M. Thomas and Ida (Popple) Thomas.
She graduated from Bellows Free Academy, Fairfax in 1949 and married Wallace R. Minor on June 3, 1950. She and her husband were dairy farmers in Fletcher until their retirement.
Margaret is survived by her daughter Martha Webb and her husband Bruce, her son Thomas Minor and his wife Beverly and her daughter Julie Hall and her husband Francis. She is also survived by her grandchildren Audra Fast and her husband Clinton; Adam Minor and his wife Melissa; Sarah Webb; and Ian Webb and his partner Loree Garceau; Amanda Richards and her husband Lewis; Casey McNally and her husband Tyler and Douglas Hall and his wife Mara and their child on the way; by her great grandchildren Makayla and McKenna Minor, Aiden and Mandy Richards, Klayton and Kalvin McNally, Gabriel, Roarke and Kellen Webb, and several nieces, nephews and cousins.
She was predeceased by her husband Wallace in 2009, her mother Ida in 1996, her father Roger in 1985 and her great grandson Colt Richards in 2018.
A graveside service will be held at the convenience of the family in Binghamville. In lieu of flowers, for those who wish, memorial contributions may be made to the Binghamville United Methodist Church or to a charity of one's choice.

To order memorial trees or send flowers to the family in memory of Margaret Ida Minor, please visit our flower store.