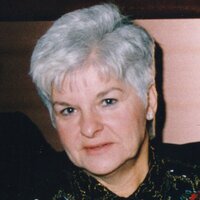 Margaret Louise Cyr of Milton, Vermont, passed away on March 22, 2021, at her home surrounded by her loving family at the age of 79. Known as "Louise" she was born in Burlington, Vermont to George and Lucille (Brouillard) Monty and married her husband, Norman Lee Cyr in 1960. Norm and Louise celebrated their 60th wedding anniversary on December 3, 2020.

Louise was the heart and soul of the Cyr family. Norman and Louise were a "united front" raising four children while building the family business, Cyr Lumber. For years, Louise was the fixture at Cyr Lumber waiting on customers with her sister, Fern Ann Wells. She was the "Iron Lady" who beat breast cancer 3 times, always putting her family first. up until she was diagnosed with Glioblastoma last year.

Norm and Louise shared many special moments including cutting a rug on the dance floor and trips to watch Norm and friends race motocross in the Baja Desert. They spent many winters in Winter Haven, Florida with a close-knit group of friends who shared a common interest in flying. They enjoyed potluck dinners at the hanger, Sun and Fun Fly-ins and even flew to have breakfast in various locations. She loved cheering on her son Jean-Paul and Matt in their motocross and auto racing endeavors and often showed up in the race pits with her famous chocolate chip cookies.

One of Louise's proudest moments was being the face of "Ladies First" an organization that offered free mammograms to women in need. The organization sponsored her son Jean-Paul's racing team. Mother and son were featured in a television campaign for Ladies First.

She took pride in her flower and vegetable gardens and insisted on mowing her own lawn because no one else could do it to her liking.

Louise leaves behind her husband, Norman Cyr of Milton. Daughter Karen Cyr of Milton, son Norman Cyr II of San Francisco, CA, Jean-Paul Cyr and his wife JoAnn of Milton, son Matthew Cyr and his wife Anne of Milton. Louise was predeceased by her daughter, Lucille and sister, Mary Ann Pepin and her son in law Greg Adams. Louise was a loving grandmother and leaves behind Aziza (Sergey), Jamilah (Jake), Sami, Jean-Paul Jr, Elizabeth, Jarek, August (Corey), and Katie. She is survived by her sister Fern Ann (Monty) and her husband Robert Wells of St. Albans, her brother-in-law, Richard Pepin of St. Albans, many nieces and nephews and her great grandson, Desmond. Also special friends, Donny Richard and Nancy O'Connor and Shelia Lamell and family.

For those who wish to leave online condolences please visit www.minorfh.com

To order memorial trees or send flowers to the family in memory of Margaret L. "Louise" Cyr, please visit our flower store.