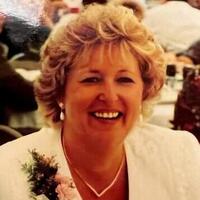 Marcia "Mema" Lamphere (Martin), 76, of Colchester/Grand Isle, passed away peacefully on October 13, 2022, at the McClure Miller Respite house in Colchester, surrounded by her Family. Marcia was born on September 21, 1946, in Burlington VT, the daughter of Leland and Shirley (Tourville) Martin. She graduated from Milton High School in 1964 and then the College of Cosmetology in 1965. In her younger years, Marcia worked at the Arns Lodge in Grand Isle, after graduating from the College of Cosmetology, she became a Hairdresser and worked in a shop in St. Albans and then South Hero. Before retiring, Marcia and her husband Roy owned and operated the Grand Isle Ferry Dock Restaurant for many years. On July 19, 1965, Marcia married Roy Lamphere at St. Rose of Lima in South Hero, VT. They were married for 57 years. Marcia is survived by her husband Roy Lamphere, her son Shea Lamphere and Elizabeth Roy of Colchester, her daughter-In law, Kelly (Marra) Lamphere of Grand Isle, her grandchildren, Jessy Lamphere (Ken Paquette), Nicholas Lamphere (Selena LaClair), Nathan Lamphere (Hailey Mercure), all of Colchester. Marcia is also survived by her sister-in-law, Gloria Coffin of Errol, NH, her aunts, Bernita Tourville of South Hero and Pearl Tourville, her uncle Donald Tourville Her cousin Merwin Coolidge of NY, her niece Leann Wright (Dayle Wright) of South Burlington, Shelly Goodrich, and by many cousins. Marcia was pre-deceased by her parents, Leland and Shirley Martin, in-laws Ralph and Elizabeth Lamphere, her son Shawn Lamphere, her niece Michelle Bartlett, grandparents Henry and Lizzie Blow, Charles Sr and Cora Tourville, Irene Baker Tourville, uncles Charles Tourville, Larry Troville and Frank P Tourville, aunts Leola Santor and Patty Jones. Visiting Hours will be on Thursday, October 20, 2022, from 4PM to7PM at the Minor Funeral Home in Milton, VT. Burial will take place on Saturday, October 22, 2022, at 2:00 PM in the West Milton Cemetery in West Milton, VT. Memorial contributions in Marcia's memory may be made to Grand Isle Rescue, Faywood Road, Grand Isle, VT. Marcia wanted to Thank those who visited her during her illness, the love and support you gave lifted her spirits. Thanks to the McClure-Miller Respite House for their care and compassion. Anyone that would like to share photos is encouraged to email copies to mema939602@gmail.com. Marcia’s family looks forward to sharing your memories of Marcia through a photo slideshow being created in her honor.
To order memorial trees or send flowers to the family in memory of Marcia "Mema" Lamphere, please visit our flower store.