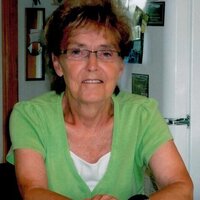 Milton - Madge E. Gordon, 76, died peacefully on Wednesday August 10, 2016 at her home surrounded by her loving family.
Madge was born in Isle LaMotte on July 13, 1940, the daughter of Cecil and Gladys ( Montville ) Lockerby.
She graduated from the Alburg High School Class of 1958.
On October 31, 1959 she married Bob Gordon in Burlington.
Madge was a member of the United Church of Milton and enjoyed volunteering at the Church Thrift Store. She had helped with weight watchers for over 30 years, was a charter member of the Milton Eagles Club, loved going to casinos, watching the Red Sox and her grandson Dustin playing hockey.
Madge worked for over 38 years as a Supervisory Aid in the Milton Elementary School.
She was a cancer survivor, in remission for over 26 years, however had severe complications from COPD and Congestive Heart Failure.
Madge is survived by her loving husband Bob Gordon of Milton, their children Judy Harlow and her husband John of FT Myers, FL and North Hero, Michael Gordon of St. Albans, and Joanne Gordon and her fiance Jason Sanders of Milton. By her grandchildren Dustin Paquette, Mike Gordon II, and Brian Harlow, her sister Phyllis Richardson of Grand Isle, her brothers Norman, James and Lynn Lockerby, her brother-in-law's Harry and Walter Gordon her sister-in-law Mary Gordon, and several nieces and nephews and her dear friends Shirley Nelson, Joan Cleveland and June Trayah. She was predeceased by her brothers Allen and Walter Lockerby, her sister Susan Bohannon and her brother-in-law Clifford Gordon.
For those who wish, memorials in Madge's name may be made to the United Church of Milton, Milton, VT 05468 or FOE 4218 Auxiliary, c/o Andy Demers, 42 Center Drive, Milton, VT 05468.
Per Madge's request, there will be no visiting hours.
A Memorial Service will be held on Monday, August 15, 2016 at 11 am in the United Church of Milton with burial following in the Milton Village Cemetery.

To order memorial trees or send flowers to the family in memory of Madge Eleanor Gordon, please visit our flower store.