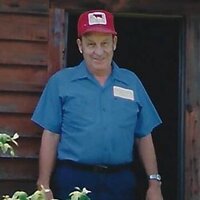 ESSEX - Linwood "Berg" Bushey, 92, passed away at the Vermont Respite House on February 27, 2017 with his family at his side.
Berg was born on August 23, 1924 on Hardscrabble Road in Milton the son of Burton and Grace (Randall) Bushey. He attended school in Milton while working on the family farm.
Berg was a lifetime farmer and operated the Bushey Brothers farm in Essex with his brother Randall. Berg was an expert in knowing the bloodlines of their herd and their farm became well known for their long line of registered Holsteins . Their hard work culminated in 1957 when they were presented the Vermont Trophy in the New England Green Pastures contest by Governor Johnson and placed fourth in the regional contest.
Berg was a lifetime New York Yankees fan and during baseball season you would find him next to the radio listening to the game or watching the game on TV. It didn't matter if the game was on the east coast or west coast, he would watch it until all hours of the night. Berg also enjoyed playing baseball, pitching horseshoes and bowling. Berg rolled many 299 games but the never bowled the cherished 300 game. Berg was 3 times state senior bowling champion and went to the National Bowling Contest in Reno Nevada where he placed 14th in his division. Berg placed 4th in the New England Horse shoe division. Berg was an avid hunter and would hunt whenever he could find the time. Berg also enjoyed playing cards and would start up a game at a moment's notice. He was playing cards right up to when he went to the Respite House.
Berg was a lover of the land and after his retirement he worked on his property to keep it in excellent condition. During the summer you would find him on his tractor mowing the fields and fixing the roads.
Berg is survived by his children Judy Hosking (Richard) of Essex, Virgil Bushey of Jeffersonville, Charles Bushey (Robin) of Essex, Robin Plouffe (Marc) of Essex and Dale Bushey (Kathy) of Williston, his grandchildren Jennifer Alemany, Erica Shearhouse, Stephanie Sharpe, David Hosking, Leslie Sexton, Molly Wagoner, Emma Plouffe, Candace Godfrey, Amber Gaworecki , Remington Kinney and Charlie Bushey as well as his many great grandchildren.
Berg was predeceased by his parents, his wife Dorothy, his sisters Wanda and Velma, his brothers Ralph, Kermit, Randall, Glen, Ormond, Verdun and grandson Justin Bushey.
The family would like to express their heartfelt thanks to Mary Bushey for her compassionate care of Berg which allowed him to stay in his home the last few weeks of his life and to all the family members that supported her. We would also like to express our thanks to the VNA hospice staff especially Ellen and Tom and the private care givers especially Tess, TJ and Ryan who were with Berg the last weekend at his home and Joanne Hunt of Colchester Family Health.
For those who wish, donations can be made to VNA Hospice Program at 1110 Prime Road Colchester VT 05446 and the McClure Miller VNA Respite House 3113 Roosevelt Highway Route 7 Colchester, VT 05446
Visiting Hours will be held at the Minor Funeral Home in Milton on Sunday March 5 from 1 to 4pm. Funeral Services will be held Monday March 6 at 10 am at the United Church of Milton on Main Street. Burial will follow in the Milton Village Cemetery.

To order memorial trees or send flowers to the family in memory of Linwood G. "Berg" Bushey, please visit our flower store.