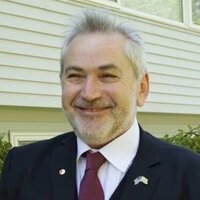 Leo was born in Famagusta, Cyprus, the son of Xenophon and Sofia (Kyriacou) Ioannou.

At an early age, Leo joined the Cypriot Army, becoming a Green Beret. He immigrated to the U.S. at the age of 21, and soon after began his family, whom he loved greatly.

Leo enjoyed his Harley and loved gadgets and technology. He was creative with computers and loved talking about Cyprus and Greek food. He was a very giving person and all of his employees at CSI were family to him. He loved being surrounded by his children and grandchildren who brought light to his life.

Leo is survived by his daughters Sofia Ioannou and her fianc Mark Perry of Hinesburg, Natalia Stratton and her husband Richard of Westford, and Katerina Shaw and her husband Brandon of Georgia, and by his grandchildren Xander Ioannou, and Peyton and Declan Stratton. He is also survived by his brother Michalis (Mikis) Ioannou of Cyprus and was predeceased by his parents and his brother Yiannis (John) Ioannou.

Memorials in Leo's memory may be made to either the VT Police Canine Assoc. 317 Academy Road, Pittsford, VT 05763 or the Burlington Emergency Vet Hospital, 200 Commerce St., Williston, VT. 05495.

Visiting hours will be held on Thursday March 15, 2018 from 4-7pm, with a Trisagion service at 6:30pm in the Minor Funeral and Cremation Center in Milton.

Funeral Services will be held on Friday at 11am in the Dormition of the Mother of God Greek Orthodox Church at 600 So. Willard St. in Burlington with Makaria following.

To order memorial trees or send flowers to the family in memory of Leonidas Xenophon "Leo" Ioannou, please visit our flower store.