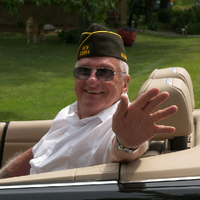 Leonard passed away peacefully in his own home, surrounded by his loving family on March 13th, 2022. Born in Alburgh, VT, on December 29th, 1930, the son of Gilbert & Helena Brisson. He graduated from the former Alburgh High School in 1949. Afterwards he enlisted in the Air Force and served in the Korean War in 1952. Upon returning home from serving, he married Shirley Ann Gonyea in August of 1953. They had two sons, Gerald and Timothy Brisson. Both Leonard and Shirley loved to garden and took great pride in keeping up the home that Leonard was able to live in for over 63 years. Leonard was a linesman for Citizens Utility then became a master electrician and trade manager for UVM, retiring in 1993. He kept busy as a deck hand on the Grand Isle Ferry briefly after retiring. His favorite job by far was working for Kuhn Memorials and considered the owners Jeff and Daryl Kuhn, very special friends. Leonard had a fondness for all animals, but especially dogs. His rottweiler Ruger, his lab Luke, and most recently his "girl " beloved rescue dog Daisy. She was 7 years old when he adopted her from the humane society, and she showed her appreciation with endless affection. Leonard kept his quick wit right up until the end and kept his family and amazing hospice nurses in stitches. Leonard is survived by: his son Timothy & wife Lola; two granddaughters, Jennifer McAllister & husband Robert, and their children Ryan (fiancé Gabby) , Leigha, Cassidy and RJ, Jessica McAllister & husband Jamie and their son Connor. Leonard also leaves his two sisters, Esther Parrott and Maxine Brow & husband Gerald, as well as several nieces and nephews. Leonard was predeceased by his parents, his wife Shirley, his son Gerry, and most recently his beloved grandson Jason Brisson. The loss of his buddy, Jason, to cancer in 2017 hit Grandpa hard as they had always had a special bond as Jason stopped in to see him often. A visitation will be held on Saturday, March 19th from 1:00 p.m.-2:00 p.m. with a funeral service at 2:00 p.m. at the Minor Funeral and Cremation Center in Milton, VT. Leonard will be buried with full military honors at the family plot at a later time. Leonard's family would like to thank the compassionate hospice nurses who cared for him. In lieu of flowers, donations may be made to C.I.D.E.R., PO Box 13, South Hero, VT 05486 or to UVM Health Network - Home Health & Hospice, 110 Prim Road, Colchester, VT 05446.
To order memorial trees or send flowers to the family in memory of Leonard O. Brisson, please visit our flower store.