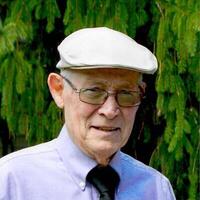 Essex Junction- Lawrence James Packard, Sr., "Larry", 83, passed away February 13, 2022 at home surrounded by his loving family. Larry was born on September 24, 1938 in Burlington and was a son of William Packard, Sr. and Lillian (Jones) Packard. Larry was a veteran of the United States Air Force. He married Joanne Pelkey in St. Stevens Church in Winooski on April 27, 1963. Larry was a commercial painter. He owned his own business and enjoyed and took much pride in his work. He painted many of the buildings in the area, to include portions of University of Vermont, University of Vermont Medical Center, and the dome on city hall in Burlington. Even though he was "retired", he was always working on a project. When he was not working, he enjoyed his time fishing, camping and traveling. He is survived by: his wife Joanne of 58 years; his 2 sons; Lawrence James Packard, Jr. and his wife Darcy of Milton, and Allen Packard and his wife Medina of Essex; his 19 grandchildren; his 13 great-grandchildren and several nieces and nephews. He is predeceased by his parents, William and Lillian Packard and 2 children, JoAnn Simmons and Bryan Packard; his brothers, Richard Packard, William Packard, Jr. and Reginald Packard Visiting hours will be held Saturday February 19, 4-6 in the Minor Funeral Home, with a service beginning at 6. Burial will take place in Mountain View Cemetery, in Essex in the spring. In lieu of flowers please consider a donation to the American Diabetes Association.
To order memorial trees or send flowers to the family in memory of Lawrence James Packard, Sr., please visit our flower store.