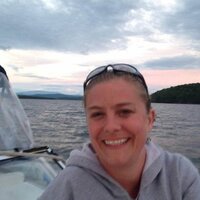 Williston- Laure Isabelle Marie Angel, 36, died unexpectedly on Sunday February 5th, 2017 in the Northeast Kingdom town of Brighton, Vermont following a snowmobile accident.
Laure was born in Villeubanne, France on March 30th, 1980, the daughter of Gilles Angel and Franoise (Devau) Hatfield, moving to Virginia with her mother as a teenager.
She graduated from the University of New Hampshire with a degree in Education. She was an avid biker and outdoors person, hiking the Appalachian Trail two times. She died enjoying the outdoors.
Laure was scheduled to be sworn in as a US citizen on March 20th, 2017. She was a middle and high school teacher at CVU before teaching at U32 in Montpelier, where she taught social studies. She was also a department head at U32 and a Union Official.
She will be dearly missed by her students, friends and family. Laure is survived by her mother Franoise Hatfield and her husband Kenneth of Dunn Loring, VA, by her fianc and best friend Kevin Wood of Williston, her step sisters and brothers Emily Angel of Barcelona, Spain, Fin Hatfield of Dunn Loring, Michael Hatfield of Falls Church, and Keith Hatfield of Leesburg, and by Skadi Hatfield, the mother of her niece Vivian and nephew Nicholas.
Laure is also survived by her future in-laws Kevin and Heidi Wood of Williston and their children Sherman Wood of Bristol and Tasha Manchester of Grand Isle.
She was predeceased by her father Gilles Raymond Angel in 2012.
Visiting hours will be held on Saturday from 3-7 pm in the Minor Funeral and Cremation Center in Milton.
Memorial contributions may be made to the U32 scholarship fund in Laure Angel's name to 930 Gallison Hill Road Montpelier VT 05602 for the 8th grade Washington, DC trip.
A Celebration of Laure's life will be held on Sunday at 1pm in the First United Methodist Church located on 21 Buell Street in Burlington, Vermont.

To order memorial trees or send flowers to the family in memory of Laure Isabelle Marie Angel, please visit our flower store.