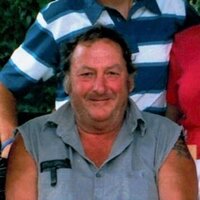 Milton - Langford H. Hibbard, 67, died peacefully Thursday February 8, 2018 at the University of Vermont Medical Center in Burlington, with his loving family by his side.

Lanny was born on September 23, 1950 in Burlington, the son of Lawrence and Bernice ( Baxter ) Hibbard.

Lanny attended Milton High School and enlisted in the U.S. Marines during the Vietnam War.

On July 25, 1970, he married Diane Savoy in the United Church of Milton. Together they settled in Milton where they began their family who survive them.

He is survived by his children Tonya Bidwell and her husband Phil, Talina Hibbard and Bryant Perry, Trinda Hibbard and Jason Shappy and Troy Hibbard and his wife Carole, all of Milton. By his grandchildren Michael, Carmen, Paige, Sydney, Marissa, Noah, Tatum, Gage, Spencer, Owen, Ava, Taylor and Caleb and his sister Dale Murray.

He was predeceased by his wife Diane Hibbard in 2008 and his brothers Lawrence and Stanford Hibbard and his sister Iris Jacques.

For those who wish memorials may be made in Lanny's memory to the VNA 1110 Prim Road, Colchester, VT 05446.

There will be no funeral service, however visiting hours will be held on Tuesday February 13, 2018 from 4-7pm in the Minor Funeral and Cremation Center in Milton. Military Honors will be accorded Lanny at 6pm by members of the USMC.


To order memorial trees or send flowers to the family in memory of Langford H. "Lanny" Hibbard, please visit our flower store.