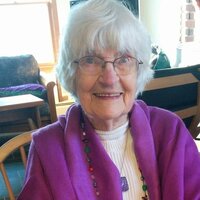 Kathlyn "Kay" Quig died a few days before her 101st birthday in Colchester, VT. Kay was born in Haverhill, NH, in 1919 to her parents (Eunice) Madeline (Wells) and Wayne Johnson Whitcomb of Bath, NH. Kay was educated in Bath, NH schools, and later received an Associate degree from the UNH School of Lifelong Learning.
Kay worked as a secretary at Grenier Field during WWII, where she met her husband, George Ernest Quig. After he left the Air Force, they became co-proprietors of Swimming Hole Cabins in Bath, NH. She later became a co-owner of an insurance business and real estate firm, and relocated to Littleton, NH in 1964.
Kay was an active volunteer in the League of Women Voters, The Grange, 4-H Club, and the Congregational Church. After her husband died, she relocated to live with her daughter's family in Vermont.
Kay enjoyed spending winters in Florida and traveling to the Pacific Northwest and the Southwest. She was an avid rockhound and genealogist and enjoyed many trips with her close friend, Florence (Penniman) Marsh. She also enjoyed reading books of all kinds and keeping up with current events. She took pleasure in baking throughout her life, especially hermit cookies, and her favorite treat of all time was carrot cake.
Kay is survived by her daughter Jennifer (Quig) Russell and son-in-law Albert Russell of Milton, VT; her son Jeff Quig of Seattle, WA; her grandson Dan of Colchester, VT; her granddaughter Kat of Milton, VT; and her wonderful great-grandchildren, Ilona, Kala, and Dade. Kay was predeceased by her parents (Eunice) Madeline (Wells) and Wayne Johnson Whitcomb, her husband George Ernest Quig, and her sisters, Jean and Eunice.
Kay's family will have a small private service. Those wishing to make a donation in Kay's memory may direct them to the Ladies Society of the Congregational Church in Littleton (in care of Ms. Emily Laflam), the Littleton Historical Society, or the State Grange in Concord (in care of Ms. Esther Herrick).
To order memorial trees or send flowers to the family in memory of Kathlyn "Kay" Quig, please visit our flower store.