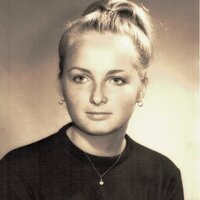 Katherine Hope Bertelson, of Colchester, VT passed away peacefully on February 07th, 2018 at the age of 70, at the McClure Miller VNA Respite House after a long and courageous battle with cancer.

Katherine, more affectionately known as "Hope" was born on October 1st, 1947 the daughter of Raymond and Philippa Greenwood. As a young child, she fell deeply in love with horses and they in turn fell in love with her. It was an unconditional love, forged between her and all of the animals she adopted throughout her life. She was in fact, not just a lover but a strong willed protector of animals and believed in their rights. As an advocate, activist and facilitator; nothing troubled her more than the sight of and/ or reports involving any amount of animal neglect, abuse or mistreatment. She definitely did more than her part with this. Never giving up, not until a true resolve was found for that animal in need. She was first and foremost a mother with two children to care for and raise: a job she took on with much pride, relentless defense, endless investment and so much more. She couldn't have possibly done a better job. She also assumed this role for others, including her grandson Tate. He was a true light in her life as she was for him. An amazing lady with a huge heart open to all, a true humanitarian and 100% selfless by design. She also loved to be in nature and spent most of her time outside. Any walking trail in mid-late Autumn, playing in the snow, any warm body of water with a sandy beach, being near a noisy brook, caught in a rain storm, a horseback ride with friends; on trail, off trail, a dirt back road, beach rides or a bare-back ride/ swim in the lake. She also enjoyed gardening very much and created many beautiful and special spots; which of course always needed weeding.

Hope attended O'Brien's School of Cosmetology and shortly after would open a business. She opted to name this new business Salon Suburban, which later became Salon Suburban and Perfect Ten Nailery. At one time, she ran and owned both businesses as separate entities and with two separate locations. Eventually, the two merged and shared one new location. It would eventually grow into a successful full service beauty salon.

Plans for a service/celebration of Hope's life will be communicated at a later date. In lieu of flowers and for those who wish, contributions may be made in her memory to:

To order memorial trees or send flowers to the family in memory of Katherine Hope Bertelson, please visit our flower store.