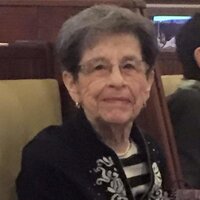 Hinesburg/Grand Isle. June Murray, 91, of Hinesburg left her family with their loving memories and joined her beloved husband, Lyman, on February 7, 2017.
June was born on December 31, 1925 in Burlington, VT, the daughter of the late Rudolph and Glenna Walker. On September 18, 1948 she married Lyman Murray in St. Joseph's Roman Catholic Church in Burlington.
June was a devoted wife, mother, grandmother, great grandmother and friend, whose family was the center of her life. She and Lyman, her husband of 57 years, raised four children in Essex Junction before moving to their lake home in Grand Isle. After Lyman's passing in 2007, June relocated to Hinesburg to live beside her daughter and her family.
June led an active life for nine decades, enjoyed a variety of sports, bowled in leagues until she was 89, and had a well-developed sense of humor. She was committed to her church, wonderfully conscious of nature and of beauty, and deeply connected to her family, who adored her.
She is survived by her children: Mary Anne Stewart of Carlsbad, CA, James and Kathy Murray of Milton, Diane and Peter Sector of St. Petersburg, FL and Joanne and Rodman Cory of Hinesburg; her grandchildren: Heather Smith, Tyler and Codi VanDyk, and Isaiah, Rebekah, Elijah and Jeremiah Cory; her great grandchildren: Eric and Alex Smith and Sianna Bouffard; as well as several nieces and nephews.
June's family wishes to express deep appreciation to the staffs of both the Baird 4 unit at the University of VT Medical Center, and the VNA Respite House for the tremendously kind and compassionate care they gave to June (and her whole family!) during her time with them.
In keeping with June's express wishes, there will be no visiting hours.
A Mass of Christian Burial will be celebrated on Saturday, February 18, 2017 at 10 a.m. at St. John Vianney Roman Catholic Church, 160 Hinesburg Road in South Burlington. A fellowship meal will follow the mass in the St. John Vianney parish hall. Burial will be at Mount Calvary Cemetery in Burlington at 2:00 PM.
In lieu of flowers, memorial contributions may be made to either the Vermont Respite House, 3313 Roosevelt Highway, Colchester, VT 05446 or the Hinesburg Fireman's Association, P.O. Box 12, Hinesburg, VT 05461.

To order memorial trees or send flowers to the family in memory of June Murray, please visit our flower store.