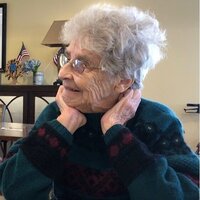 Josina was born on August 28, 1934, the daughter of Joost and Pietje (van Duyn) Schouten in Winterswijk, the Netherlands.

In 1955, she married Gerhard (Bill) Vreman. They immigrated to the United States later that year. As they raised their family, they lived in several states, arriving in Milton in 1969.

Over the years, Josie worked as a teacher's aide at the elementary school, and as an EMT and Crew Chief on the ambulance squad.

In 1995, she and her husband retired to South Carolina, where she participated in the Red Hat Society, the church choir, and the garden club among other activities.

In 2018, after the death of her husband, she returned to Milton.

Josie was predeceased by her husband, her son Ronald, and all of her brothers and sisters. She is survived by her daughters Anna Vreman (Lowell Symmes) of Milton, VT, Frances Vreman of Lincoln City, OR, and Marian Boucher (James) of Franklin, NH, on granddaughter, Kristi Clark (Brian) of Otis, OR, and three great grandchildren.

In lieu of flowers, please consider donating to the charity of your choice.

There will be no services.

To order memorial trees or send flowers to the family in memory of Josina Hendrika Vreman, please visit our flower store.