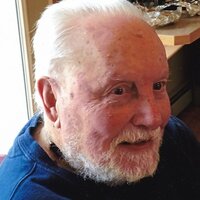 Joseph Patry, 95, of Milton VT, after a happy and prosperous life, this industrious man of family, honesty and integrity passed away on September 27, among his family, his very favorite place to be. He was born in Leominster, Mass to Yvonne (LeClerc) and Louis Phillippe Patry on October 6, 1921. He attended school in Leominster and enlisted in the US Army Air Corps during World War II where he served as crew chief on C47 aircraft stationed in Japan and the Philippines. After WWII, with his wife, Fran, he returned to Leominster where together they opened the Design Center, a window display company. Subsequently, he worked as a machinist at General Electric, Dixie-Cowdrey Machine Corp, and Hamilton Standard, a division of United Aircraft. He went on to become an Industrial Engineer with IBM, working at the Endicott, NY plant until moving to work in Site Planning at the Essex, VT and Bromont, PQ plants. He thoroughly enjoyed business travel to France, Spain and Singapore and happily retired in 1986 after more than 25 years with IBM. Growing up during the Great Depression had a lasting impact on him - he grew vegetables and fruit for his young family, continuously improved himself for a better life for himself and his family and always saved for a rainy day. His family was his highest priority - as the parents of nine children he and his late wife always advocated kindness and taking care of each other, honesty, hard work and self-sufficiency, and the importance of home ownership. He was a proud and generous father and grandfather who gave much guidance and love over many years and welcomed one and all to join him in activities - skiing or golf, or making chocolate fudge or his most favored, fishing.

His family would like to thank his caregiver, Karen Hart and the TLC Home Care team, the VNA hospice team and Dr. David Little for all of their help for him to live comfortably at home. In lieu of flowers contributions in his name may be made to the Vermont Children's Hospital c/o UVM Medical Center, 111 Colchester Ave, Burlington VT 05401. A service will be planned for the Spring when his family and friends will gather for a celebration of his life.

To order memorial trees or send flowers to the family in memory of Joseph Patry, please visit our flower store.