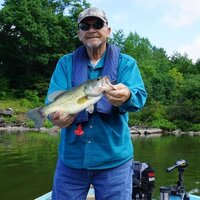 Milton - Jon C. Kruger, 70, died Wednesday November 30, 2016 at the UVMMC in Burlington, with his loving family by his side.
Jon was born on June 21, 1946 in Burlington, the son of George and Rebecca (Brown) Kruger.
He graduated from So. Burlington High School in 1964. He served in the U.S. Air Force and had been employed for the South Burlington Police Department for many years.
Jon married Debra Ploof on May 24, 1997 in Milton, Vermont. .
Jon loved to fish and loved to introduce people to fishing. He was a Vermont Hunter Safety Education Instructor and a Firearms Instructor for many years. He also enjoyed being a "Let's Go Fishing" instructor for many years.
In addition to Debra of Milton, Jon is survived by his son, Joshua Kruger of Huntington, his daughter Jessica Williams and her husband Winston of St. Albans, his grandchildren Eric, Kira, Luke and Leia, his brothers Douglas Kruger of Fl., and Mark Kruger and his wife Karen of Milton, his mother-in-law Carole Ploof of South Burlington, his sister-in-law Randi Sanville and her husband Chris of South Burlington, his brother-in-law Sean Ploof and his wife Nancy of Burlington and by his nieces and nephews Christopher, Daniel, Jason, Christina, Tyler, Ali, Rayan and Erin. He was predeceased by his parents, his son Jeremy, his father-in-law James Ploof, his nephew Sean and his niece Ashley.
For those who wish memorials in Jon's memory may be made to the Rebecca Kruger Memorial Fund at the Community Lutheran Church, 1560 Williston Road, So. Burlington, VT 05403.
Visiting hours will be held on Monday December 5, 2016 from 4-7 pm in the Minor Funeral and Cremation Center in Milton.
A Funeral Service will be held on Tuesday December 6, 2016 at 11 am in the Community Lutheran Church in So. Burlington.

To order memorial trees or send flowers to the family in memory of Jon C. Kruger, please visit our flower store.