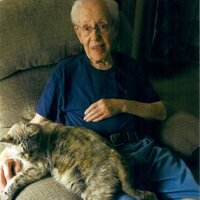 John was born on January 13, 1925 in Burlington, the son of James C. and Bessie (Fiske) Loop growing up on School Street. He graduated from Burlington High School in 1942 and shortly after enlisted in the US Navy where he proudly served aboard the USS Andromeda during World War II. Soon after, on October 1, 1949, he married Shirley M. Root in Springfield, VT at the Methodist Church.

He worked for a short time at Herberg Auto Service, then began his career with General Electric in Burlington at Lakeside, retiring in 1986.

He was an avid fisherman on Lake Champlain competing in the annual LC Fishing Derby, trout fishing in Bristol, and annual deer hunting at camp in Granville, VT. John enjoyed gardening and puttering around the house.
He also enjoyed picking apples in Chazy, NY, pontoon boat rides at his deceased sister's summer home in Orford, NH, snowmobiling and time with his grandchildren.

John is survived by his loving wife of over 71 years, Shirley M. Root Loop of Colchester, by their daughter Linda R. Baden of Edgewater, FL and her daughters Sonja L. Baden (her fianc Brian Isham and his son Noah) of Waterbury Center and Lindsay M. Baden (her longtime partner Adam Mullen and his son Brayden) of St. Albans, his son James C. Loop and his wife Janice of Ft. Lauderdale, FL and S. Burlington, and their 3 children Laurie L. Deo, James C. Loop, II and Elizabeth Loop and several nieces, nephews, cousins and dear friends.

He was predeceased by his brothers William and Cedric Loop and by his sisters Elizabeth Loop Gomo and Marguerite Loop Wright.

In following John's wishes, there will be no services. Burial will be in Lakeview Cemetery at the convenience of the family.

To order memorial trees or send flowers to the family in memory of John Merton Loop, please visit our flower store.