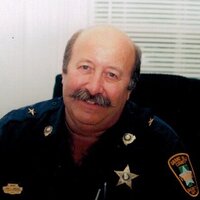 Grand Isle - John Stanley Lawrence, 70, died peacefully on Thursday June 30, 2016 in the Burlington Health & Rehabilitation Center.
John was born November 15, 1945 in Grand Isle, the son of George and Mary ( Letourneau ) Lawrence.
He graduated from Milton High School in 1965 and enlisted in the U.S. Air Force where he served in Vietnam during the Tet Offensive.
Following his discharge in 1968, he married Sue Tebeau on April 20th, 1968 in St. Joseph's Catholic Church in Grand Isle.
John worked for ECI, then Fassett's Bakery, with a bread route through the Islands.
He campaigned for Sheriff while delivering bread, and was elected Sheriff on February 1, 1973, which he served until his retirement in 2003.
John was very active in serving his community, serving on the Grand Isle Fire Dept., a founding member of the Grand Isle Rescue, and continued serving with the North Hero Fire Dept. At one point, John was the Grand Isle Sheriff, North Hero Fire Chief and the Rescue Chief of Grand Isle and North Hero.
John is survived by his wife Sue of Grand Isle, his sons John Paul Lawrence of Clifton Park, NY & Wade Lawrence and his fianc Sandy of Grand Isle, his grandchildren Darren and Gordon, his brothers and sisters Dick Lawrence & wife Arlene of Manchester, CT., Ellen Deo of Grand Isle, Mike Lawrence of Grand Isle, Mark Lawrence & his wife Vicky of Grand Isle, Peter Lawrence of Malta, NY and Mary Lawrence of Burlington his sister-in-law's Liz Lawrence of Milton, Brigit Lawrence of Grand Isle and Irene Lawrence of Vernon, CT., his mother-in-law Theresa Steady of Grand Isle, brother and sister-in-law's Betty Hurlbut and her husband Daniel of Ormand Beach, FL., Jane Kirkman of Corppas Cove, TX., Bradley Steady and his wife Brenda of Milton, Kevin Steady of Grand Isle, David Steady of Portsmouth, NH., Sarah McDonald of Essex and Shawn Steady and his wife Melissa of Grand Isle and by several nieces, nephews, and cousins.
He was predeceased by his parents, his brothers Gary, Jim, Joe, Edwin and Thomas Lawrence, his sister Linda Prouty, and his brother-in-law's Donald Deo and Herbert Steady.
Thank you for all that you have done, Dad. You were a great father, giving so much to your family, town, county and country. You will very much be missed and loved.
Rest in Peace,
John Paul
Memorial contributions in John's memory may be made to Grand Isle/North Hero Rescue, P.O. Box 79, Grand Isle, VT 05458.
Visiting hours will be held on Wednesday July 6, 2016 from 4-8pm in the Minor Funeral Home in Milton.
A private burial will be in the family lot in the Grand Isle Cemetery at the convenience of the family.
Online condolences may be made to www.minorfh.com


To order memorial trees or send flowers to the family in memory of John Stanley Lawrence, please visit our flower store.