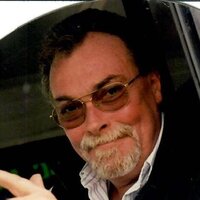 The Good Lord decided it was time to call John "Bob" Comeau home on February 20th, 2021.

Bob was born in Burlington, Vermont on August 4th, 1945. He grew up in Colchester with his parents and four siblings in a house next to the St. Michael's College Campus. He would later tell his grandchildren many true stories about the adventures he had here.

After graduating from Rice Memorial High School, Bob enlisted in the United States Air Force and was stationed at the Plattsburgh Air Base. It was in Plattsburgh that he met the love of his life, Patrica (who he affectionately called "Pumpkin" and "Memee") on a blind date. They had been married for 54 years.

Bob and Pat settled down in Georgia, Vermont where they raised their daughter Kimberly. Bob worked for several years at General Electric after being honorably discharged from the Air Force. Bob also went on to work for Vermont Transit and ended his career driving a bus at the University of Vermont campus. Bob loved interacting with the students and having visits from his family on the job.

In addition to being a loving husband and father (and father-in-law), Bob was also Bumpa to his two grandchildren, Katelyn and Cody. Shortly before his passing, he also became a great-grandfather to Boen Michael.

There is so much about Bob's life that can't be put into words. Bob was a quiet man, yet he could capture the room when telling one of his true stories. He loved his family but always had a witty comeback under his breath. He was personable, a great listener, had a nickname for everyone he loved, and had the biggest sweet tooth of anyone we know.

We will think of him every time we notice the birds outside our window, whenever we order a cone of mint chocolate chip ice cream, when we wash our vehicles (admittedly a little less thoroughly then he would), as we unwrap Christmas gifts ever so carefully to not rip the paper, and in so many other moments that are ingrained inside our hearts.

To our dear Bob, Dad, Bumpa--we miss you and your laugh, hugs, and stories, but we take solace knowing that your soul is at peace. You will continue to live on in our hearts and in our lives in a thousand little ways every day. It is hard to say goodbye, but we know that you would simply say, "See ya!"

Bob leaves behind his siblings, Richard D. Comeau and Kathleen C. Therriault as well as her husband Henry Therriault. Bob is also survived by his wife's family: Mary and Marvin Fountain, Jeanette and Peter Riccardone, Joanne and Homer Lapier, Bill and Karen Gajewski, Joe and Robin Gajewski, Becky and Peter Gilbo, and Sandy and Shawn Ryan.

Our family would like to extend our warmest gratitude to the staff of UVM Medical Center (especially the staff of Miller 5 and Baird 4) as well as the McClure Miller Respite House staff for the impeccable, dignified care they provided during Bob's last months here.

We will be holding an intimate family service in the days to come. A burial is planned for the spring, and we will come together to celebrate Bob's life once it is safe for us all to gather.

In lieu of flowers, we ask that you send donations to the McClure Miller Respite House. Donations can be made online or by calling (802) 860-4499, ext. 3812. Donations can also be mailed to: Development Office, UVM Health Network - Home Health and Hospice, 1110 Prim Road, Colchester, VT 05446.

You can also honor Bob by reaching out to a loved one to tell them how much they mean to you, by remembering that it is never too late to make a positive change in your life, and by sneaking an extra cinnamon candy or piece of dark chocolate when no one is looking.

To order memorial trees or send flowers to the family in memory of John Robert "Bob" Comeau, please visit our flower store.