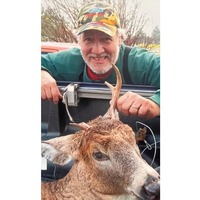 Burlington, VT--Jeffrey Scott Real, 62, of St. Albans, passed away March 25, 2022 at University of Vermont Medical Center with his loving family by his side. Jeffrey was born on July 31, 1959 in St. Albans, a son of Alfred George Real and Joyce (Lumbra) Real. He married Kim Lavalette on August 27, 1983 in Georgia, VT. Jeffrey was a print machine operator at Lane Press for many years and then became a custodian at the Colchester Middle School. He was an outdoorsman. There were many fishing trips to Georgia High Bridge with his three girls. He loved to hunt deer and duck, and he enjoyed the fishing in Vermont. His brother will remember the memories made at hunting camp on Georgia Mountain. Jeff was a fan of the Seattle Seahawks, Carolina Hurricanes ( the former Hartford Whalers) and the Boston Red Sox. He did enjoy NASCAR. Those who knew Jeff, he was larger than life, and was an amazing person. He was always adventurous, which usually included a little danger factor. There was no such thing as a stranger, just a friend whom he didn't meet yet. The faculty and students at school will remember "J-R" for his acts of kindness, caring and devotion. He is survived by: his wife of 38 years, Kim; his 3 daughters, Nikki Lavalette of Milton, Ashley Real of St. Albans and Jessica Holmes and her husband Peter of Rutland, his mother Joyce Real of St. Albans; his mother in law Theresa Lavalette of Milton; his three grandchildren, Addison, Bentley and Ashton; his siblings Steven Real and his wife Kristie of Georgia, VT and Lisa Real of Florida and many nieces and nephews. He is predeceased by his father Alfred George Real, his father in law Reginald Lavalette and his sister Theresa White Visiting hours will be held on Tuesday, March 29, 2022 5-7 pm in the Minor Funeral Home, with a service at 7pm.
To order memorial trees or send flowers to the family in memory of Jeffrey Scott Real, please visit our flower store.