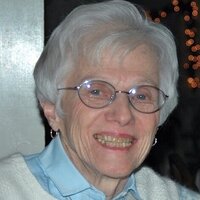 Shelburne - Janet Leh Raymond, 92, passed away peacefully on June 22, 2019 at Wake Robin in Shelburne surrounded by her loving family.

Janet was born on November 11, 1926 in Allentown, PA, the daughter of the late Henry W. and Alma (Bittner) Leh. She graduated from Allentown High School. She spent many of her childhood years in Vermont first as a camper, where she became an accomplished equestrian, and then as a counselor at Brown Ledge Camp in Colchester VT. She met her first husband Francis Hewitt at Brown Ledge and they were married in 1944 and had 2 daughters, Carol and April. In those early years she became a Red Cross Nurse's Aide at the Mary Fletcher Hospital and volunteered with several organizations.

Janet returned to Allentown, PA in the mid1950s where she later met Jack M. Raymond. They were married on January 23rd, 1957 and had 2 sons, Jack and Peter. Janet was a charter member of the Society of the Arts at the Allentown Art Museum, a volunteer at Christ Lutheran Church and the Food Bank of Allentown. Janet and Jack both became avid skiers taking many ski trips to Western ski areas and Europe. They traveled extensively and had many wonderful experiences seeing various parts of the world.

Janet is survived by her children Carol Bitter of Milton, April Hewitt of Colchester, Jack Raymond Jr. and his partner Penni Avery of Underhill and Peter Raymond and his wife Kate of Middlesex. By her grandchildren Eleanor Raymond, Nicole Raymond, Christine Ryan and her husband Craig and Josh Bitter and his wife Stefanie and by her great grandchildren Molly and Maggie Ryan, Madylin and Jacklyn Bitter and by several nieces and nephews.

She was predeceased by her husband Jack in 2009, her sisters Betty Jane Afflerbach in 1955 and Elinor Leh Fletcher in 1994.

The family would like to acknowledge and thank all the wonderful staff at Wake Robin, who have taken wonderful care of our mother over the past 10 years. We would also like to extend thanks to the VNA Hospice team, who were so helpful at the end of our mother's life.

A graveside service was held on Friday June 28, 2019 at the Grandview Cemetery in Allentown, PA., followed by a celebration of Janet's life at the Lehigh Country Club.

To order memorial trees or send flowers to the family in memory of Janet Leh Raymond, please visit our flower store.