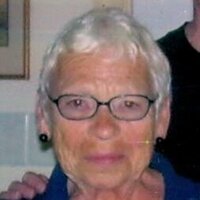 Milton - Jane Irene Page, 89, died peacefully Friday March 31, 2017, with her loving family by her side.
Jane was born in Worcester, MA on August 18, 1927, the daughter of James and Mary (O'Donnell) Quinn.
Jane spent her early years in Worcester, MA.
She moved to to Troy NY. and graduated From Cathedral Catholic High school in 1945,
She went to work at Norton industries and on Sept 1, 1951. She married Robert Page and was always known as Jane Q. Page.

She enjoyed gardening cooking and golf.
She traveled to Germany to join her husband shortly after the war. They moved to Corning , Staten island, and Huntington NY. She supported her husbands career as an Electrical Engineer.
She made many friends in those places and worked hard to make a great home and she was the life of the party where ever she was.
In 1966 they moved to Osgood Hill Rd in Essex. And Bought a former dairy farm.
She loved Animals. It was a very busy time,
In 1989 they moved to Pine Knoll Shore N.C. and built a house by the ocean,
In 2012 She moved to Milton VT.
Jane Loved her dogs especially her last 2 -Beckett and Teddy Bear..
She Spent her last St Patrick's day smiling her Irish eyes, She will be missed.
Jane is survived by her children Marta Page of Milton, James "Jimmy" Page and his wife Lucy of Westford, Beth Page and her husband Stephen LaMonda of Milton, Susan Sweet and her husband David of Deland, FL, Anne Page and her spouse Priscilla Drake of Charlotte, North Carolina. She was the proud grandmother of her grandchildren Ethan, Robert, Seamus, Andrew and partner Chelsea, Christina, Jessica and partner Matt, Besset and wife Jenny, Sy, Toby, Satchel, Mookie Jane, Connor and Jane. Her great grandchildren Maxwell, Ellie, her sister Anne Decataur and several nieces and nephews.
In addition to her husband Robert, Jane was predeceased by her daughter Amy Page - Derosia in 2013, and her son Bobby in 1963 and by her sister Mary Burch in 2016.
Donations in Jane's memory may be made to the Alzheimer's Assoc., VT Chapter, 300 Cornerstone Dr., Suite 128, Williston, VT 05495.
Special thanks to the Georgia Health Center and VNA Staff's and the Green Mountain Rehab.Center. She was able to stay in her home for over four years.
She only spent the last week at Green Mountain Nursing Center with end stage Alzheimer's disease.
The care and support she received was above and beyond and Jane Q. Page and family are forever grateful.
Visiting hours will be held on Wednesday April 5, 2017 from 4 to 6 with a funeral service following at 6 in the Minor Funeral and Cremation Center in Milton.

To order memorial trees or send flowers to the family in memory of Jane Irene Page, please visit our flower store.